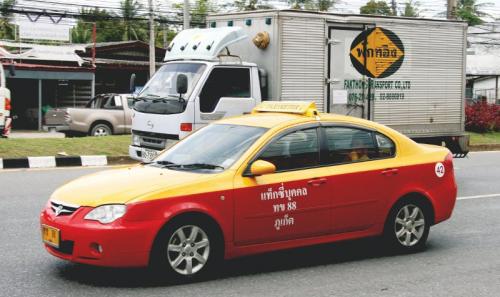 Fortunately for the driver of the metered taxi, the Patong drivers capitulated to filing a police complaint. Historically, the repercussions have been much worse. Life for Phuket’s metered taxi drivers continues to be difficult despite the recent agreement allowing them to add 30 more cars to their airport fleet.

An employee of Phuket Taxi Meter (PTM) – who asked not to be identified for safety reasons – said that problems with the local taxi “mafia” continue unabated. While PTM drivers are free to transport guests from the airport to hotels, specific taxi drivers prevent them from picking up passengers in some resort areas and along the popular Patong beach road.

Resort areas under such control cited by the PTM employee are “near the Laguna resort complex in Cherng Talay, in front of the Novotel Phuket Resort in Patong, at Nai Thon Beach and near Club Med Phuket in Karon.”

The problem affects not only metered taxi drivers, but also hotel staff who must explain to guests why the taxi they called never arrived.

Certain taxi drivers have enforced their monopoly in the past by literally pulling passengers out of metered taxi cabs and pressing nails into metered cabs’ tyres.

Past efforts to level the taxi playing field have met with failure: “Previous Phuket governors and commanders tried to solve this problem, which has been ongoing for a long time, but they were not successful. Some hotels also cannot solve this problem for us,” the PTM staffer said.

The metered taxis are the only taxis in Phuket that use meters to determine fares; other taxis charge flat fees. The PTM staff explained the fare from the airport. “We charge 100 baht for a pick up at Phuket Airport, then 50 baht for the first two kilometers and after that, 7 baht per kilometer.”

Taxis that serve the Don Muang and Suvarnabhumi international airports in Bangkok also charge an airport pickup fee, though at 50 baht it is half the price charged in Phuket.

Despite the transparency of the meter-based charges, the PTM staffer said, “Most passengers ask us to charge them a flat fee and not use the meter. However, the fare ends up being nearly the same; usually within about 20 baht of what they would have paid if they did use the meter.”

Regardless of the method ultimately chosen, metered taxis must run their meters to comply with the regulations of the Phuket Land Transportation Office (PLTO).

Even at the airport, metered taxis can’t seem to catch a break. The PTM booth is located at the end of the terminal, far from the other taxi counters and far from passengers exiting the baggage claim area.