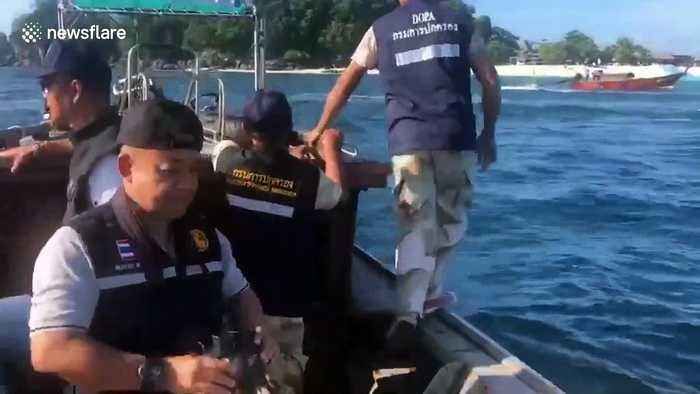 The Polish and Thai couple that headed off Phuket’s southern beaches for an afternoon expedition nearly two weeks ago, are still missing. More searchers have been added as the search remains active, and widens. And an 18 year old crew from a speedboat, who fell overboard on Wednesday during a collision, hasn’t been seen since.

Polish 26 year old Mateusz Juszkiewicz and his Thai 23 year old female friend, Werakan Siriprakon from Nakhon Sawan, failed to return to Ya Nui Beach in southern-most Phuket island on December 7. They set out just after midday with three other couples for an afternoon of kayaking.

A friend of Werakan’s family, Anongkan Srisupat, told The Phuket News that they have been actively involved with the search.

Polish embassy officials and Mateusz two sisters have been keeping close tabs on search efforts. They’ve all thanked Thai rescuers for their efforts so far.

Meanwhile, the search for the 18 year old boat boy Kittipong “Boy” Samunboot, who fell overboard from the tour speedboat “Choksuphasan” on Wednesday, continues off the east coast of Phuket.

A Navy patrol boat has joined the search along with local fishing boats. The search area has been focussing on an area of around one square nautical mile off Koh Khai Nok where the incident happened. 24 divers from the Royal Thai Navy and Phuket Marine Police, plus local volunteer rescue crews, are now involved in finding Kittipong.

The 49 year old captain of “Choksuphasan”, Surat Mat-O-Sot, died in hospital following injuries sustained in the collision with the motoryacht “Stella”. So police have been battling to put together the sequence of events that led up to the collision, and the cause of Kittipong’s fall over the side of the boat.

Surat was involved in another boat collision in 2014 off Kai that killed two South Korean tourists and injured 26 others. On that occasion he was captain of “Seastar 29”, carrying around 40 tourists returning from a day-trip to Maya Bay when it collided with the fishing vessel “Sinpichai 11”. He spent two years in prison over that incident but, upon release, started skippering boats off Phuket again. PHOTO: “Choksuphasan” after the collision with “Stella” on Wednesday afternoon – Newshawk Phuket

Popular UK website canes Mövenpick Resort in Bangtao, Phuket for its use of a baby elephant to entertain guests