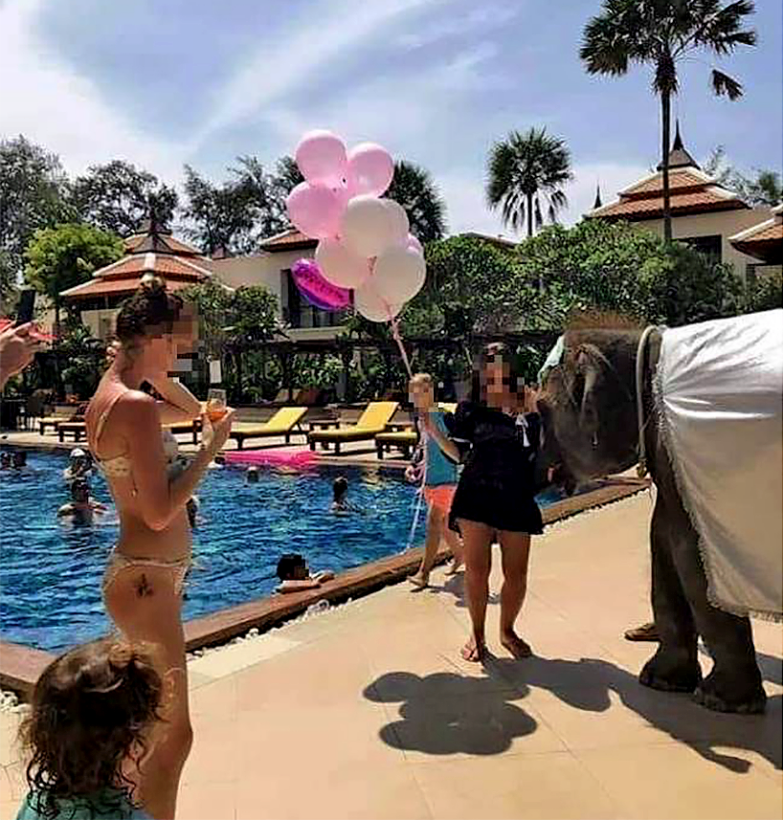 A big international social media and entertainment website based in the UK, LADbible.com, which attracts around 18-20 million clicks a month, has caned a Phuket hotel over some photos of guests interacting with a baby elephant.

The photos and story was circulated locally last week but has now been picked up by the popular website, spreading the poor publicity for the Mövenpick Resort in Bangtao to a much larger and broader international audience.

“A shocking photograph shows a baby elephant, allegedly being forced to entertain guests at a five-star resort in Thailand. In the picture, the endangered animal can be seen covered in a white sheet as it is led out to a party by the pool at the Mövenpick Resort Bangtao Beach hotel in Phuket”.

(Since 1986, the Asian elephant has been listed as Endangered on the IUCN Red List, as the population has declined by at least 50 percent over the last three generations, estimated to be 60–75 years. It is primarily threatened by loss of habitat, habitat degradation, fragmentation and poaching.)

The use of ‘animals for tourism’ is controversial in Thailand where many animals are kept captive to entertain tourists – dolphin shows, bird shows, crocodile and reptile shows, tiger shows and zoos. Many of the country’s larger, and hugely popular, cultural stage shows also use animals in their presentations.

And the use of elephants for tourism has been around for half a century as Thailand, which has banned forest logging (where elephants used to be used as the beasts of burden), now has many, many elephants, and their offspring, with little to do… except entertain tourists.

Many of the Thailand tourist demographic mix don’t have the same sensitivity to ‘animal tourism’ as others in the west. The animal shows in Thailand are mostly legal businesses and the use of animals for financial gain in the tourism industry has provided a popular cultural experience for some tourists in the past.

In the LADbible.com article Amy Jones from Moving Animals notes that elephants are sensitive, intelligent animals, “not products to be used as a ridiculous party prop”.

“Mövenpick Resort Bangtao Beach should not be promoting and supporting such cruelty, and this stunt will undoubtedly be bad for business as more and more tourists turn away from activities which exploit elephants.”

She went on to recount another case earlier this year, also in Phuket, about an emaciated baby elephant named “Dumbo” who was filmed, under-nourished, performing for tourists. Dumbo was forced to do his party tricks at the infamous Phuket Zoo.

“Earlier this year, Phuket made headlines after Moving Animals released photographs and footage of an skeletal baby elephant, ‘Dumbo’, who was forced to ‘rave’ to music and perform tricks for tourists entertainment.

“No elephant should have to suffer from this kind of abuse, and Phuket must take steps to make sure that these beautiful animals are protected.”

Mövenpick Resort in Bangtao is a five-star hotel and part of the Accor Group, situated directly across the road from Bangtao Beach.

“We are aware of a post related to a baby elephant in our resort. We have investigated this situation and although we did not organise the party, we failed to disallow the activity and had mishandled the situation. We sincerely apologise for this matter.

We are issuing a formal communication to all staff reiterating that our hotel employees are expected to act as ambassadors by respecting and protecting our environment. We have also informed our tour operator that such activity will not be allowed at our hotel.”

Some social media responders have made it clear the practice can’t be tolerated. Other activists have been trolling the Mövenpick Resort by commenting on every post made by the resort, venting their anger…

I can’t believe a hotel in this day and age would allow this to happen? Disgusting you all should be ashamed of yourselves – Dean

I do not understand even the stupid tourists. They don’t mind animal bondage.people are absolutely without feeling. And the natives are to protect their nature and animals and not to destroy them – Lara

Terrible this hotel has elephants for entertainment. How people still doing this shit – Ady

Disgusting and barbaric that you use elephants to entertain your guests. Shame on your resort!!!! – Susie 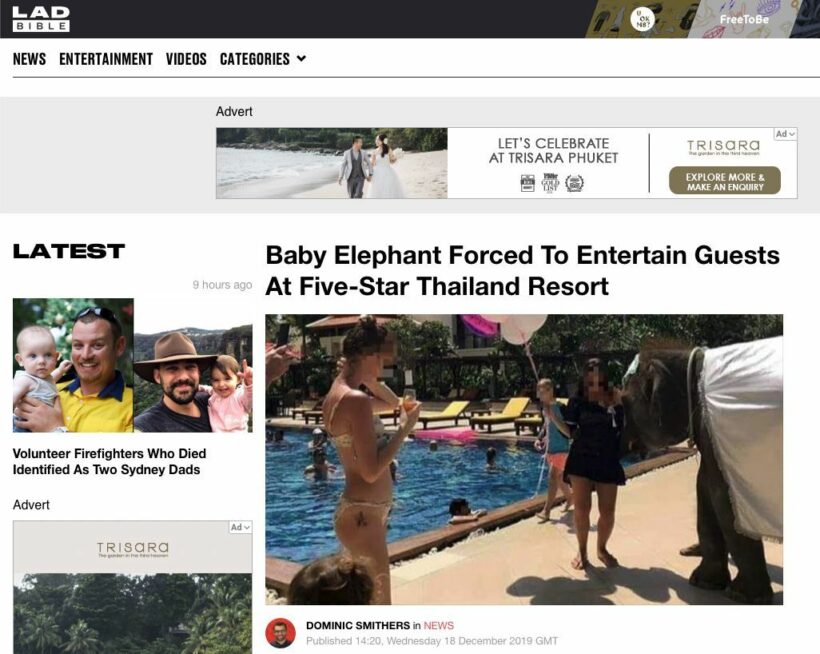 The Thaiger is looking for a writer, in English, to join our team