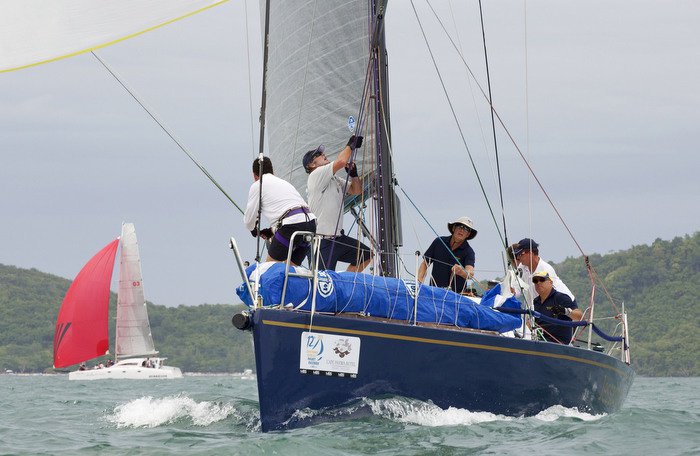 PRO Simon James wasted no time in getting the fleet into sequence. Island courses for all: around the windward mark and back around Lone Island to the finish for all classes except IRC Racing I, who headed off on a longer course taking in Aeo, Hei and Bon islands.

As the wind held in, the PRO opted to send all but the Cruising and Charter/ Bareboat classes on a second race around Mai Thon Island finishing near the safe water mark off of Panwa Cape.

Oi! (AUS) got the better of Kodo (AUS) in the first IRC Racing I start and lead up to the first mark. Kodo closed the gap on the downwind leg and the two TP52’s match-raced around the course with little between them.

It was a close duel and Oi! crossed the line just 10 seconds ahead, claiming line honors and the win on corrected time.

In race two, Kodo took an early lead and managed to keep daylight between themselves and Oi!, sailing a good race and further stretching out their lead around Mai Thon Island.

They crossed the line just 56 seconds ahead of Oi! after more than two hours of racing and with handicaps accounted for, they recorded their second win of the series.

It wasn’t enough to knock Oi! off the top step of the podium, who claim a deserved win, but in their first competitive outing Kodo should be rightly proud of their performance and improvement over the Regatta against a well-campaigned, multiple-regatta winning boat and crew.

Jessandra II (AUS) came into the final day with a 1,2,1 scoreline and needed to sail clean and keep themselves out of trouble in order to protect their lead and secure the title.

However, sailing easy is not in this crew’s nature and they were here to compete. Lining up like dinghies on a startline, Fujin (AUS) and Jessandra II got away clean. Foo 4 (USA) found their rhythm and soon took a clear lead on the water, going on to claim line honors.

Jessandra II and Fujin raced each other close. Almost side-by-side as they rounded the outer port channel marker in Chalong Bay, the two were inseparable with Fujin managing to get a small lead over Jessandra II on the final leg, finishing ahead by just five seconds. However, it wasn’t enough as Jessandra II converted third on the water to a handicap win.

It was again just five seconds on race two, but this time it was the difference between Old Mutual International Endeavour of Whitby (MAS) and Fujin for second and third. The winner was, again, Jessandra II whose three-minute winning margin secured them the IRC Racing II title.

While a third overall was probably not the result Fujin was hoping for at the beginning of the week, they should be commended for their startline performance, winning almost all and showing many how to hit the line at speed.

Multihull Racing were back in full strength with the six-boat line-up looking to end the Regatta in style.

Two more wins for Asia Catamarans Hurricane (AUS) saw them unbeaten over the week and the clear class winner. However, second and third places were hard earned with just seconds in it. Less than 30 seconds separated WOW (GBR) and Java (CHN) in race one and while WOW scored another second in race two it wasn’t enough and they had to settle for third overall, one point behind Java.

It was like a game of cat and mouse as the Firefly 850’s chased each other around the start area and along the line in race one, with Twin Sharks (GBR), Advanced Racing Mamba (GBR) and Voodoo (GER) neck-and-neck, and Dyer Straits (AUS) and Blue Noze (GBR) on the second row.

Mamba Advanced Racing rounded first and headed back down the course while series leaders Twin Sharks were off-the-pace.

Mamba Advanced Racing lead Voodoo and Blue Noze around Lone Island with Twin Sharks further back and as they re-emerged from Chalong Bay it was Voodoo who had snatched the lead which they held through to the finish.

Twin Sharks bounced back in race two with an outstanding win by nearly two minutes and secured their dominance winning the class by six points. Advanced Racing Mamba finished second overall and Voodoo was third.

With just one regatta under their belts, the four Corsair Pulse 600 crews were still learning their rides as they lined-up on the first day, and over the four days of some of the trickiest racing conditions ever at Phuket Raceweek, all four boats learnt a lot and improved.

SuDu 3 put in a late charge on the final day, wining the start they held off series leaders SuDu 1 to add a second win to their tally and heap on the pressure.

The series was to be decided on the final race, and after one hour of racing, the final race (and the title) was decided by just three seconds.

It was SuDu 1 who edged out SuDu 3 in the final race and took the overall Corsair class title by a single point. SuDu 3 had to settle for second with SuDu 4 third overall.

Following two wins, Sansiri Windstar jumped to the top of the Cruising class standings and brought a one point lead into the final day.

Despite fumbling the spinnaker hoist and wrapping it around their keel early in the race, Sailescapes Fargo Ladies (AUS) recovered well to finish third on the day and an admirable third overall.

Uhuru (AUS) reveled in the stronger breeze making the top mark first in the Charter/ Bareboat class and despite being overhauled later by Venture (AUS), Uhuru managed to keep in touch and earn a well deserved win on corrected time – their first win of the series.

However, it was too little too late as Venture‘s second place in the race was enough for them to hold on to the win overall from Uhuru with Fei Yu (AUS) in third.

The 36 boats and 500 or more sailors and friends came together to celebrate at the final prize-givings hosted by Cape Panwa Hotel.

Phuket school robbed of B240k worth of electronics