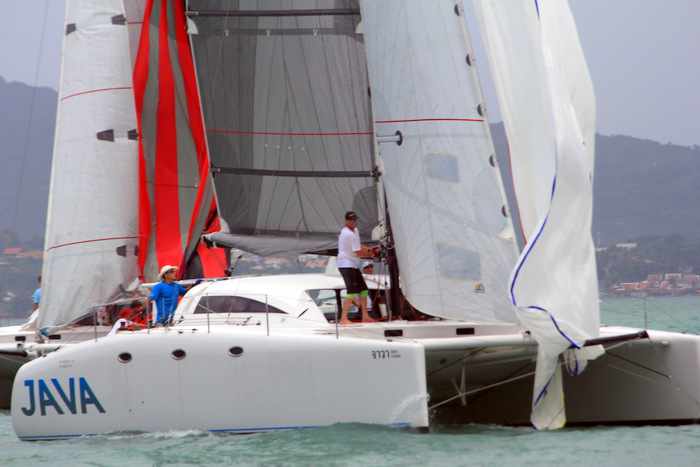 PHUKET: Mick Coleman and his crew on Java blazed around the course off the east coast of Phuket over the weekend to win the Racing Multihull Class in the Phuket Multihull Solutions Regatta.

Java mastered wind blasts of up to 30 knots to score four firsts and two second-place finishes, amassing a total of just six points to lift the Overall Perpetual Trophy at the prize-giving ceremony last night.

Phuket yachtsman Alan Carwardine and his crew on Asia Catamarans Hurricane placed second overall on eight points, followed by Bob Mott and his band of sailors on the renowned catamaran Nina which closed the regatta with 14 points.

Shane Grover and Zam Bevan’s Corsair Sprint MK2 Bullet scored the only On Course Side (OCS – over the start line at race start) during the regatta to amass a total of 22 points to place fourth, followed by Kirill Stashevskiy’s Galeforce on 26 points.

For the rest of the Racing class it was a “Battle of the DNFs” (Did Not Finish) as the winds wreaked havoc with the fleet.

However, the Gazette has yet to confirm that Horwood had to withdraw to recover his 63-foot monohull Uravai which was reportedly blown onto the rocks at Baan Nit, at Ao Yon.

In the Firefly 850 Sport Class, Neil Ayre and his Advanced Racing Team on Mamba held on to score a victory in the final race to win top honors overall in the class with nine points.

John Newnham on Twin Sharks recovered well after shredding two mainsails to finish second on 11 points, while Hans Rahmann on Voodoo placed third with 13 points after scoring two DNFs halfway through the regatta.

For full results from the 2014 Multihull Solutions Regatta click here.

Many of the crews will be looking to make fast repairs to their boats in time to join the Phuket Raceweek Regatta, which starts on Wednesday.

Taekwondo star: ‘My coach hit me’