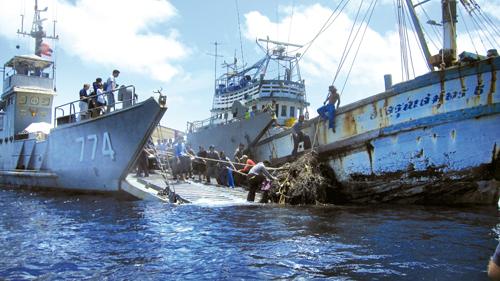 The day after Her Majesty’s birthday on August 13, Phuket’s dive community, supported by the Royal Thai Navy, Marine Police, Marine and Coastal Resources Conservation Department and local government bodies are joining together in a mass effort to raise the world’s awareness of the importance of marine and coastal eco-systems.

“Positive activities like this should be conducted every year. It is not only important as a way to preserve beaches in Phuket and marine systems around the island, but it also improves Phuket’s economy and generates more income for the province,” Capt Kritsada Rattanasupa of the Royal Thai Navy’s Phuket-based Third Area Internal Security Operations Command said last week.

Put your money where your mouth is!

Last year’s event saw PADI dive centers across the island and over 500 participants at the event. This year, not only PADI but also SSI and CMAS dive certifying agencies will be participating, as all three prominent dive groups join together to put the marine environment ahead of business.

“The main difference this year is that it is much more all-encompassing, you now see SSI’s side of the table, and we are looking at contacting CMAS about sponsorship,” said one of the event organizers, Kerry Leach. “It’s completely open this year. And the thing is, the PADI dive centers have welcomed this because they know we need maximum support. The whole idea is that we are working together on Go Eco Phuket, and now we are, finally.”

The Royal Thai Navy again will be providing protection to the dive boats by posting at least one ship at each island being cleaned up.

Last year, the Royal Thai Navy vessel off of Koh Racha Noi was able to commandeer the assistance of a fishing vessel in order to hoist a discarded fishing net weighing 4.5 tons from the bottom of the sea floor after divers spent nearly two days disentangling it from the reef system.

To ensure that diving vessels are protected during the cleanup, the Marine Police have requested that all diving boats leaving the popular diving departure point of Chalong Pier partake in the event or stay in the bay for the day.

Go Eco Phuket, which is still a loosely knit group of dedicated individuals and dive centers, has been jumping through the bureaucratic hoops necessary to become a non-government organization recognized by the Thai government.

“It’s going to be a legal foundation where we have some authority in advising the government. We can’t change laws until we are legal,” Ms Leach said.

“We know it’s difficult to police [the sea], said Ms Leach, referring to the prevention of illegal fishing in national parks.

“Every year we are told that ‘yeah, you pour money into the Similan National Park, but it goes into the wider national parks budget. So this is where we are trying to make a difference, Ms Leach said. “We can police it a little from our side, and take some of the pressure off the government. The long-term goal of the foundation will be to mobilize divers from across Thailand to return the surrounding reefs to a clean, healthy state.”

“We have a strong dream of making the reefs of Phuket and the surrounding islands clean, pristine and sustainable, and making sure they belong in the top diving destinations in Thailand and the world,” Tony Andrews, Thailand’s West coast PADI Regional Manager and Project AWARE Ambassador, said at the inaugural event last year.

This event will again be the biggest reef cleanup in terms of number of participants, Ms Leach said. However, the record is an unofficial one.

Go Eco Phuket has a bid placed with Guinness World Records to set an official record.

The local government is sponsoring a cycling event ahead of the cleanup, which will have participants riding from Sarasin Bridge to Surakul Stadium in Phuket Town (map here) on August 4.

The government is also taking charge of the after party on August 14. The location of the party has yet to be confirmed. However, there will be a Recycling Costume Contest with winning participants taking home between 10,000 and 30,000 baht said Royal Thai Navy’s Phuket-based Third Area Command public relations staffer Jirayu Naragoonphithak.

All are welcome to join the free events, though space is limited, Ms Leach said. To join the cleanup event email goecophuket@gmail.com.

Divers who need to rent equipment will be asked to make a donation of 200 baht to Go Eco Phuket. The funds will go toward future projects, which may include a shark release project, installation of more moorings at popular dive sites and the sinking of several decommissioned Royal Thai Navy vessels to promote wreck diving in the area and relieve pressure on current dive sites.