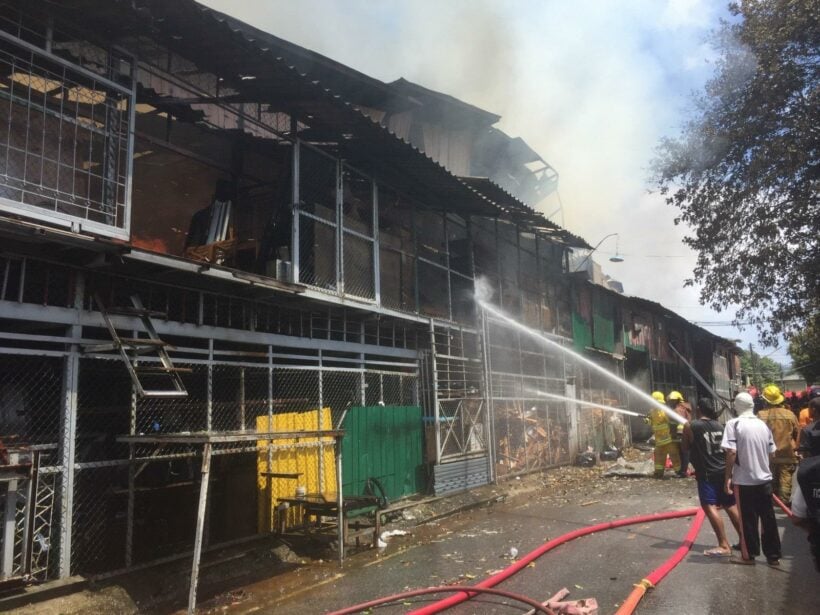 Fire fighters took more than 4 hours fighting the fierce blaze with over 20 fire trucks and assistance from local Navy personnel to control the furniture warehouse fire.

Damage has been estimated at a value of around 20 million baht. Authorities are currently considering revoking the license of the factory.

No injuries have been reported as the fire engulfed the furniture warehouse yesterday (June 30) while officers from the Royal Thai Navy Third Area Command were also called in to help to put out the fire.

Phuket Vice Governor Thawornwat Kongkaew headed to Wichit to inspect the burnt-out skeleton of the factory.

“After four hours the fire was under control but fire fighters were still pouring water into the building to make sure a spark doesn’t set things off again. There was a total of 21 fire trucks used to put out this fire. The warehouse was used to store wood materials, paint, chemicals and completed furniture.”

“The company had a factory license but we found that fire extinguishers had not been adequately installed. This kind of factory must be more strictly controlled. This particular factory has caught fire three times in the past. Luckily there were no injuries yesterday.”

“The owner of the factory told us that the replacement cost of damages is about 20 million baht – most of the damage is to new furniture. This furniture was ready to be transferred to customers.”

“At this stage we believed that the fire was caused by an electric short circuit. However the Phuket Forensic Police are investigating the scene to find the true cause of fire.”

Yesterday The Thaiger reported that the factory was full of flammable materials, including paints and thinners, and that the floor was covered in saw-dust.

Chiang Rai: Day Eight – full speed ahead to the middle of the caves