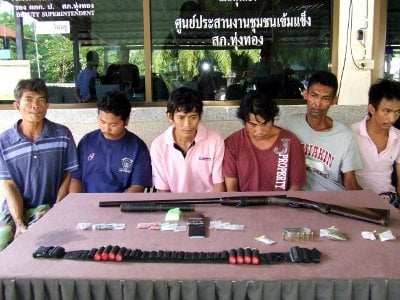 PHUKET: A former monk was one of six suspects arrested in drug raids in Kathu, Phuket earlier this week.

Following a tip-off that a man living in a hut had been selling drugs to local youths, a Thung Thong Police drug suppression unit on Sunday raided the dwelling, located in a rubber plantation near Bang Wad Reservoir in Kathu.

They arrested alleged drug dealer Jongrak Chuchumcheun, 45, before he had a chance to flush a small stash of drugs down the toilet. Seized as evidence was less than a gram of ya ice (crystal methamphetamine) and, after a search of the hut, three grams of marijuana and an old, legally-licensed rifle.

Thung Thong Police Inspector Teeradate Jiragsa told a press conference that Jongrak, a former monk, might have taken enough drugs “to turn him crazy,” but said he wasn’t sure if he had used drugs when he was a monk.

Another officer at the conference who happened to grow up with Mr Jongrak in Trang described him as a “good student” as a youth.

Also attending the press conference was a woman, accompanied by her boyfriend, that the former cleric accused of property theft after his arrest.

The unnamed woman denied the allegations, stating that after his arrest she had removed Mr Jongrak’s birds and Buddha images from the hut for safekeeping. She intended to hand them over to his father, she said.

Research into Mr Jongrak’s background revealed that he and the woman were acquainted from his days as a monk in Sichon district, Trang.

After leaving the order he moved to Phuket, where he was to keep an eye on the rubber plantation.

“When Jongrak was a monk in Trang, this woman always provided him with food, clothing and other necessities. He thought that she was in love with him,” Capt Teeradate said.

Police believe that Mr Jongrak kept annoying the woman and, following his arrest, told police that she stole his birds and Buddha images.

Also presented at the press conference were six other suspects arrested on Monday, the first day of the “Operation Tapee” nationwide drug crackdown ordered by Deputy Prime Minister Chalerm Yoobamrung.