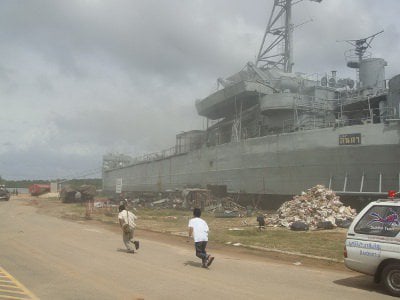 PHUKET: Firefighters this morning scrambled to contain a fire that broke out on the retired warship RTMS Lanta, now a museum and tourist attraction in the heart Krabi Town.

Fortunately, no people were injured in the blaze.

Lt Col Thongchai Sengrod of the Krabi Town Police said that he received a report at 11am that smoke was billowing out of the ship, kept in dry dock in front of the Krabi Provincial Administration Organization (OrBorJor) offices in Krabi Town.

“Fire trucks from Krabi OrBorJor were already there when we arrived. We quickly called for assistance from Krabi Town Municipality fire stations as well as from the Sai Thai and the Ao Nang Tambon Administration Organizations [OrBorTor],” he said.

From their initial investigation, police believe the fire broke out in the engine room, where workmen were welding while carrying out repairs to the retired warship.

“We found oil stains near where the men were welding, so we believe that welding sparks started the fire,” Col Thongchai said.

“Fortunately, nobody was injured or killed. We have yet to fully assess the extent of the damage,” he added.

Col Thongchai explained that the HTMS Lanta, a Tank Landing Ship measuring 98 meters long and 15.5m wide, was built by the US Navy in 1945.

Commissioned as the USS Stone County, the ship served in the Mid-Pacific in the 1960s and assisted in operations during the Vietnam War.

The US Navy handed over the warship to Royal Thai Navy in 1970, when it was renamed the HTMS Lanta 714.

The ship was decommissioned from active service on April 30, 2007.

Click here to see a video report of the HTMS Lanta being installed in the dry dock.