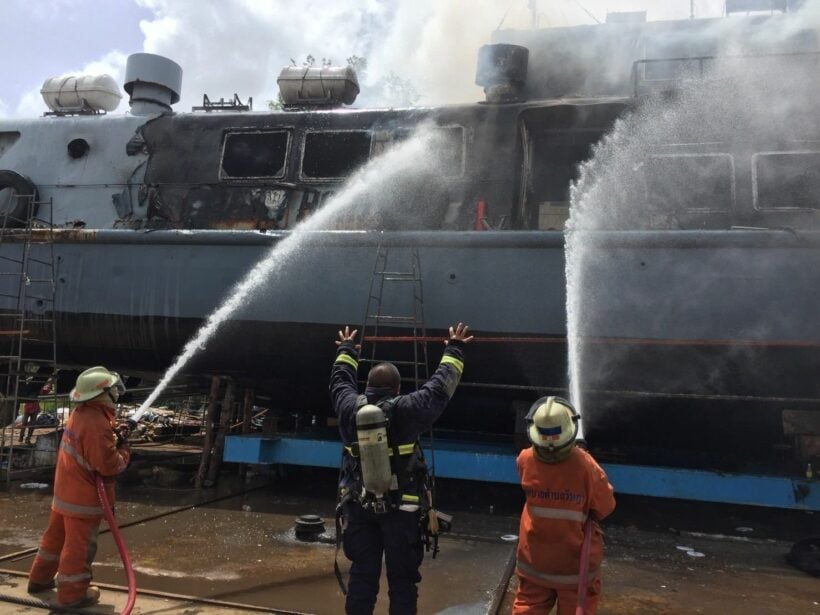 A fire has burnt out a large tour boat under maintenance in Rassada, east of Phuket Town, this afternoon (August 6). The damage bill is said to be more than 5 million baht.

The Phuket City Police were notified of the fire at 1.30pm near the Phuket Fish Market Organisation. Police and fire fighters arrived at the scene to find the boat ablaze. Lots of smoke and flames were enveloping the boat.

It took more than one and a half hours to control the fire as there was strong winds fanning the flames. The boat was totally gutted whilst another boat nearby sustained only minor damage.

Yossanat Songkiet, the owner of the Asian Phuket Marine slipway says, “The boat has been sitting here since July 31. The current works on the boat were scheduled to be finished this Thursday (August 9). The boat is 20 metres long and carries about 125 passengers with 6 boat crew.”

“While the boat was being worked on I saw a fire in the front of the boat. I shouted for workers who were on board the boat to get out the fire extinguishers. The fire started spreading very quickly. So I called fire fighters.”

At this stage police believed that the fire started from sparks while metals were being welded. Sparks caught onto a sofa inside the boat and the fire spread throughout the vessel very quickly.

Forensic Police are investigating the incident to determine the cause of fire.

Video of the blaze below…