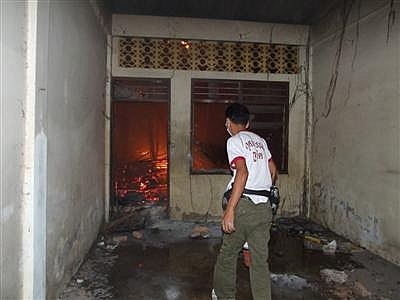 PHUKET: The abandoned home of a former policeman went up in flames last night in what police suspect was a fire lit accidentally by people who broke inside to take drugs.

Phuket City Municipal firefighters received a report of the fire on Phul Pon Road Soi 13 at about 11:30pm.

Firefighters arrived quickly, but their fire truck could not access the narrow lane and they had to rig up over 300 meters of hose in order to douse the flames.

Once underway, the effort took about 20 minutes, with firefighters managing to contain the blaze before it spread to adjoining structures.

The fire completely gutted wooden cupboards, a bed and other flammable items inside.

Among the remains found inside were many strips of tin foil, matches and traces of marijuana on a cutting board.

Police say they suspect that youths broke into the home to use it as a place to take drugs, and that they accidentally caused the fire.

Long abandoned, the home was owned by a former Phuket City policeman who used to rent it out, neighbors said.