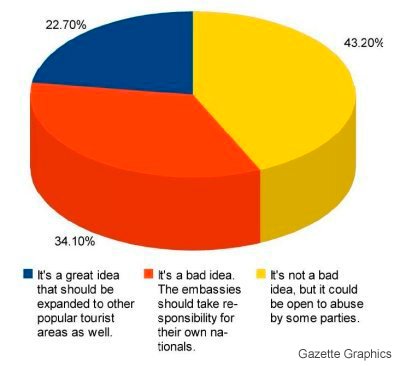 PHUKET: Online readers are dubious about a plan by the Tourist Police to build a temporary shelter for down-on-their-luck foreign tourists, results of a recent Phuket Gazette poll reveal.

The poll asked: “The Tourist Police will build a temporary shelter for down-on-their-luck foreign tourists. How do you feel about this project?”

Overall, 22.7% of people who took part agreed with idea by answering, “It’s a great idea that should be expanded to other popular tourist areas as well.”

The most popular response, at 43%, was, “It’s not a bad idea, but it could be open to abuse by some parties.”

However, 34%, answered, “It’s a bad idea. The embassies should take responsibility for their own nationals.”

In a breakdown by demographic, tourists were the most likely to think the shelter could result in abuse. Fully 50% chose this response, compared to 41% of local residents and 35% of Thais.

The new poll, launched today, asks readers the simple question: “All things considered, do you think Phuket is a safe place to visit and live?”