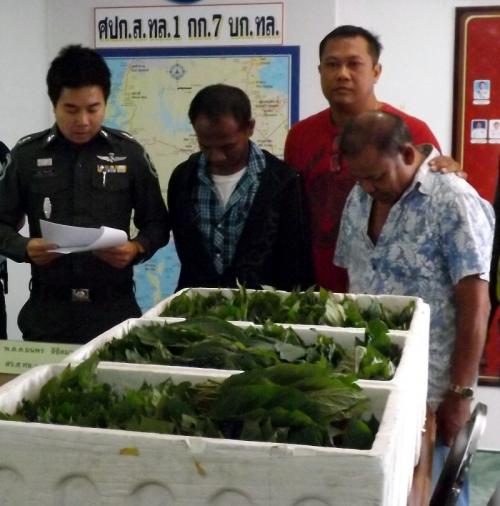 PHUKET: A Phuket bound “black plate” taxi was caught doing double-duty yesterday as it hauled 45 kilograms of kratom leaves back from Surat Thani after dropping a group of Russian tourists off in a resort in Nakorn Sri Thammarat.

The drug-running duo in the car have been charged with the intent to sell a category five drug and for bribery after allegedly offering cash to the investigating officers.

“The suspects were trying to negotiate with police to let them go free by offering the officers money. So the suspects were also charged with bribery,” Phang Nga Highways Police inspector Manaporn Likitmanon said.

The 31-year-old driver, Suriya Yukonthorn, and his Phuket born companion Fuen Jitchamnan, 55, were arrested at a checkpoint along the Southern Seaboard Highway in Krabi.

“The suspects told us that they were heading back to Phuket after having taken a group of Russian tourists from Phuket to a resort in Sichon District, Nakorn Sri Thammarat,” Maj Manaporn said.

After having flagged the suspicious car at the checkpoint, police searched it. They found six foam boxes sealed with black tape, three in the back seat and three in the trunk.

“The suspects claimed that they were getting ready to leave for Phuket when a man in his 40s came up to them and asked them to deliver the boxes there – promising that somebody would pick the boxes up at the Rajabhat Phuket Intersection [in Phuket Town],” he said.

“The suspects claimed they didn’t know what was in the boxes or the bag,” he added.

Despite the fact that kratom trees are native to Southeast Asia, their leaves have been designated a controlled substance, in the same category as cannabis, since promulgation of Thailand’s Kratom Act in 1943.