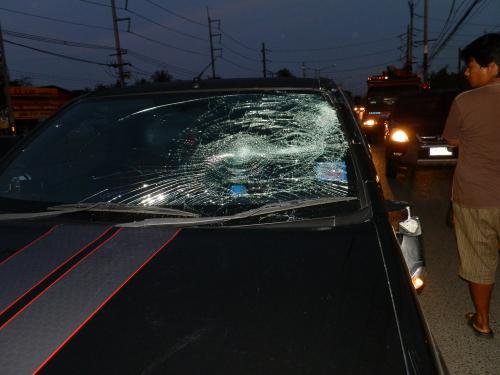 PHUKET: A man who fell asleep at the wheel while returning home from dropping his girlfriend off at Phuket International Airport early this morning slammed into a power pole and caused a blackout throughout a large residential area in Thalang.

Col Sarit Bootnongsaeng of the Thalang Police and first responders from the Kusoldharm Foundation arrived at the scene on Thepkrasattri Road in Baan Lipon, Srisoonthorn, shortly after 5:30am.

They found a heavily damaged Toyota Fortuner SUV on its side in front of a Family Mart convenience store about 100m from the Provincial Electricity Authority (PEA) Thalang substation (map here).

Driver Anusak Srikwan, 30, escaped with no broken bones and no concussion.

“He only had scratches on his body from the accident,” said Col Sarit.

“Luckily I was wearing my seat belt,” Mr Anusak told the Phuket Gazette.

“I took my girlfriend to the airport early this morning; I felt so sleepy while driving home to Wichit,” he said.

“I didn’t realize I fell asleep. The next thing I knew I had crashed into the pole,” Mr Anusak added.

A phone booth was demolished in the impact, which sent debris flying out across the road, smashing the windscreen of an Isuzu pickup passing by.

Pickup truck owner Veerapong Wongsaart, 22, sustained no injuries in bringing his vehicle to a halt.

PEA officers who rushed to the scene restored power to the area within an hour.