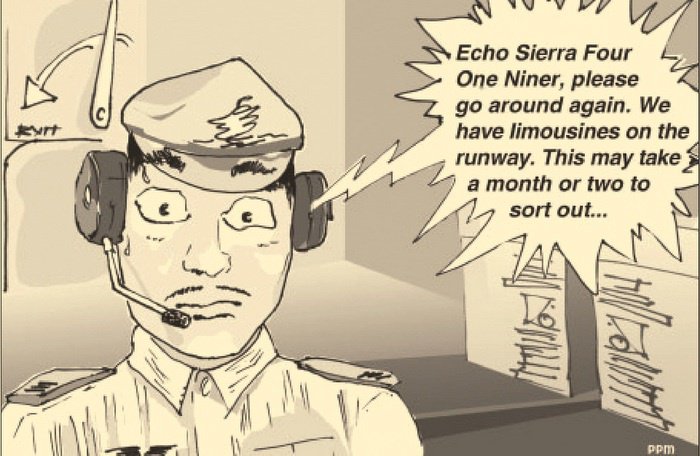 PHUKET: Phuket Governor Nisit Jansomwong is making great efforts – with what appears to be the buds of success – to make metered taxis a pillar of public transport on the island. However, a decade ago, then-Governor Udomsak Uswarangkura was hearing a different tune as his metered-taxi push left his car stuck in a sea of furious airport ‘limousine’ drivers.

The man was simply about to pop out of Provincial Hall for lunch when about 100 angry drivers surrounded his vehicle, preventing him from moving for more than two hours – one can imagine the pangs of hunger.

At this point in time and for years to come, it was par for the course to see such a thuggish backlash to the governor’s alleged threats of sourcing Army muscle to ensure that the airport limousine drivers did not attempt to intimidate metered taxi drivers.

The irony, which those who have been on the island for at least more than a year can enjoy, is that it in fact did take the National Council of Peace and Order mobilizing the Army to root out the deeply-entrenched, illegal taxi mafia. However, even that effort has not completely seen us out of the jungle, as the lack of public transportation continues to be an unsightly stain on Phuket’s reputation as an international tourism destination.

That topic was on page one of the August 6 Issue of the Phuket Gazette but hiding just inside the cover was a classic headline and revelation: ‘Tsunami flushed out Patong Bay’. Though it took less than 10 years for the bay to once again play host to water of questionable quality, it turned out that levels of harmful bacteria in the bay, which were associated with untreated human waste being discharged directly into it, had been reduced to nearly zero. Those were again the days of poop-free Patong, though as we all know – they did not last.

At that point, the concern was not about whether the Russian market would be coming or even the Chinese – who was even thinking of such markets 10 years ago? The real question was whether or not the Scandinavians had faith in the effectiveness of the recently implemented tsunami-warning system and would once again grace our shores. The answer of course was that the numbers would quickly surpass pre-tsunami arrivals, though perhaps we should have been more careful for what we wished for.