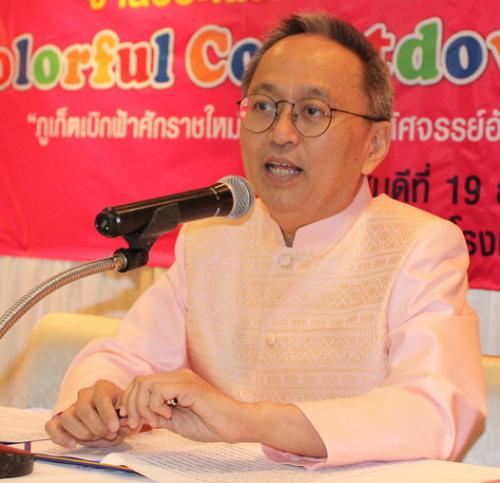 PHUKET: “Colorful Countdown Phuket 2014” is set to usher in the new year with light shows and live concerts at Sanam Chai Park (map here) from December 29 to 31.

This year’s theme for the Phuket Provincial Administrative Organization (PPAO) event is “The Charm Wonderland of Light”, explained PPAO President Paiboon Upatising, also known as “the pink panther” for his tendency to use the color pink in public projects.

“We will turn Sanam Chai Park into a magical landscape of colorful lights and lanterns,” Mr Paiboon said.

The event grounds will be arranged into three zones, with each zone being a different entertainment venue.

Zone 2: Information area that will provide greeting cards, event schedules and the opportunity for visitors to have their picture taken with a horse, the Chinese astrological animal of 2014

The festival will also feature a Miss Phuket 2014 beauty pageant, the winner of which will be Phuket’s tourism ambassador to the world, Mr Paiboon said.