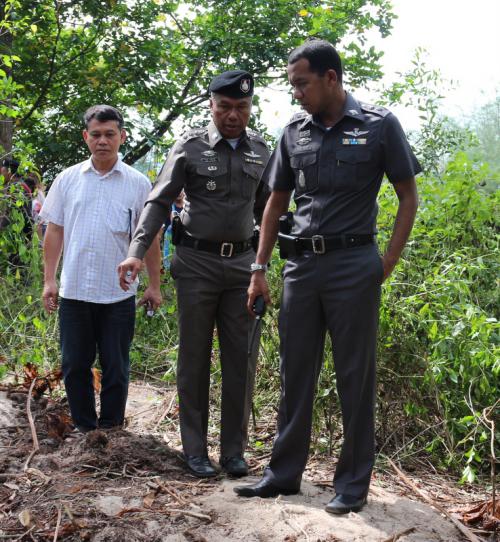 PHUKET: More human remains were found today in the pine woods where family members of missing 7-year-old Nong Dear and villagers yesterday discovered fragments of a human skull, along with shorts and a pair of slippers that matched those the girl was wearing at the time of her disappearance.

It was a spirit medium who led the family to the pine forest, when she described seeing the girl in a hut near a pine forest and beach, Capt Thada Sodarak of the Chalong Police explained.

Though Nong Dear’s mother, Jaroon Papkaew, acknowledged that the slippers found yesterday appeared to be her daughter’s, she has become unsure about whether or not the shorts belonged to the 7-year-old (story here).

“I don’t know about the shorts, they were too muddy, and I couldn’t tell,” she said.

“I hope that the remains being found are not those of my beloved daughter. But at this point, I just want my Nong Dear back, dead or alive,” she said.

Rib bones, part of a foot, a tooth and pieces of skin and flesh were found during a search by Chalong Police, forensic officers, Nong Dear’s relatives and local residents this morning.

Police think that an animal may be responsible for dismembering the body that has been discovered.

“We can’t be sure that the body parts belonged to Nong Dear; we have to see the results from the DNA test first,” said Capt Thada.

After no evidence was found during the first sweep today, the group prepared for a second search of the area, Capt Thada said.

“Nong Dear’s relatives asked the spirit medium to pray at the place where the skull fragments were found,” he said. “They believed that the prayer would help us find more evidence.”

The group then set up a structured search. They lined up in rows, standing a meter apart, and combed the ground in a 20 to 30 meter circle around where the skull fragments were found.

Within 15 minutes they had found the additional remains.

“We plan to collect footage from CCTV in the area leading to the pine forest,” Capt Thada said.