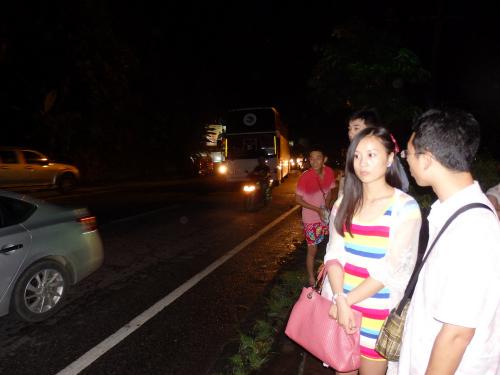 PHUKET: An entire busload of 35 Chinese tourists were quickly and safely evacuated from a tour bus after its engine died while climbing the steep road up Patong Hill last night.

The tourists were en route from the Aphrodite ladyboy show on the bypass road to the famed Simon Cabaret ladyboy show in Patong when the bus broke down just before the Chao Pho Seua Shrine (also called the “Tiger Temple” – map here) at about 10pm.

“I was driving up the hill when the engine suddenly stopped, so I immediately opened the door for tourists to get out. I was afraid the bus might roll backward down the hill,” bus driver Suriya Soonsak, 28, told the Phuket Gazette.

“Fortunately, the brakes held. Nonetheless, I asked my assistant to put wood chocks that we carry on the bus behind the back wheels just in case,” Mr Suriya said.

“It took about three hours to clear the bus off the road,” said Capt Wattanathorn Bumroongtin of the Thung Thong Police.

“Not long after the incident, all the tourists were taken to their destination in vans provided by Pacific Holiday, the company organizing the tour,” he added.

Jaturong Kaewkasi, chief technical adviser at the Phuket Land Transportation Office (PLTO), confirmed to the Gazette today that his office will investigate why the bus was not fitted with license plates.

“We will check with officers who were at the scene and with the transport operator that owns the bus, Amonsak Keerathithamsophon,” he said.

“The bus owner told us this morning that the bus underwent a safety inspection two weeks ago. Regardless, we will have it brought in for another one by our team.

“It is a serious offense to illegally operate a tour bus on the roads. The operator may be fined up to 200,000 baht,” Mr Jaturong explained.

He added that his officers will also investigate why 35 passengers were on board, when the bus is branded as registered to carry only 22 passengers.

Body found off Phuket believed to be missing Singaporean student