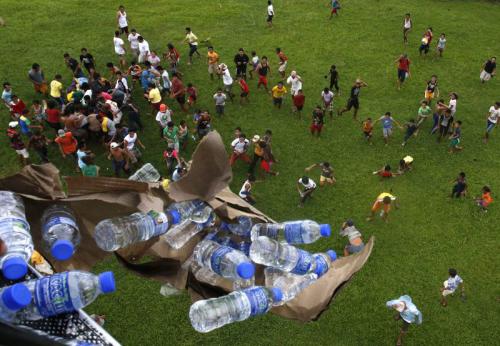 PHUKET: The Rotary Club of Patong Beach has collected over 226,000 baht through its Philippines Typhoon Haiyan Disaster Relief Fund. However, the club is pushing for more donations in light of the desperate need of those in the affected areas.

Half of the funds raised will be sent directly to the Disaster Fund of Rotary District 3860, based in the affected area, and the other half will be used to buy “family survival packs” from Disaster Aid Canada.

“These are boxes with tents, survival gear and water-purification systems for a family of seven,” Chairman of International Projects James Domville said. “We’ll be sending five of those at this point.”

“We have a very effective and simple way of helping if donations are channeled through our charity fund, as I can immediately transfer funds where they are needed, and it can be done in a day,” he said.

With over 4,000 Rotarians on site in the affected area in the Philippines, the necessities bought with the funds sent directly to the district can be quickly dispensed to those in need, Mr Domville said.

“During the Haiti earthquake disaster, we raised well over 300,000 baht. We are hoping to match that this time,” he said.

Mr Domville asked anyone making a donation to call him on his mobile at 089-872 9156 or email him at beaujeu1@yahoo.com with details of the donations so a receipt can be issued.

Donations to the club can be deposited or transferred to: