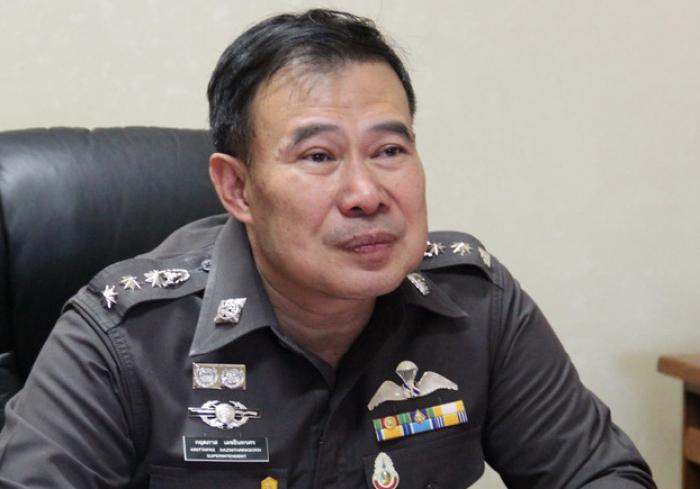 PHUKET: Chalong Police Superintendent Krittapas Dazintharasorn has publicly denied that any of his officers are – or have been – involved in arresting and extorting money from foreign dive instructors in Phuket.

Col Krittapas’ denial of corruption among his officers follows more than 20 dive instructors being rounded up at Chalong Pier (map here) and taken to Chalong Police Station on March 10 (story here).

“No charges were pressed… Instead, we were told that police asked for money from the instructors,” Pongsawan Sathatham, Secretary of the recently formed Association of Thailand for Underwater Sports (ATUS), alleged on Saturday (story here).

Speaking to the press at Chalong Police Station last night, Col Krittapas vouched for the integrity of his officers.

“I have questioned the officers on duty that day. They said no officers asked for money from the instructors,” Col Krittapas stated.

“I assure you that Chalong Police have no part in such allegations. We did not pick on the instructors and we did not ask them for money.”

Col Krittapas explained that his officers do have the authority to arrest anyone suspected of breaking the law. However, any suspects found to have done nothing wrong are released.

The Chalong top cop pointed out that other agencies were responsible for regulating the dive industry in Phuket.

“The Chalong Police have not been tasked as the main agency to ensure that dive businesses comply with the law. Other officials take care of it,” he told the Phuket Gazette.

“The industry is regulated by the ATUS, the Employment Office and other departments. Chalong Police only look after safety issues and give dive companies advice.”

Col Krittapas assured that any “bad lieutenants” among his ranks will be weeded out.

“Corrupt Chalong Police officers must be punished. I will not ignore it if any of our officers are found to be collecting money from people,” he said.