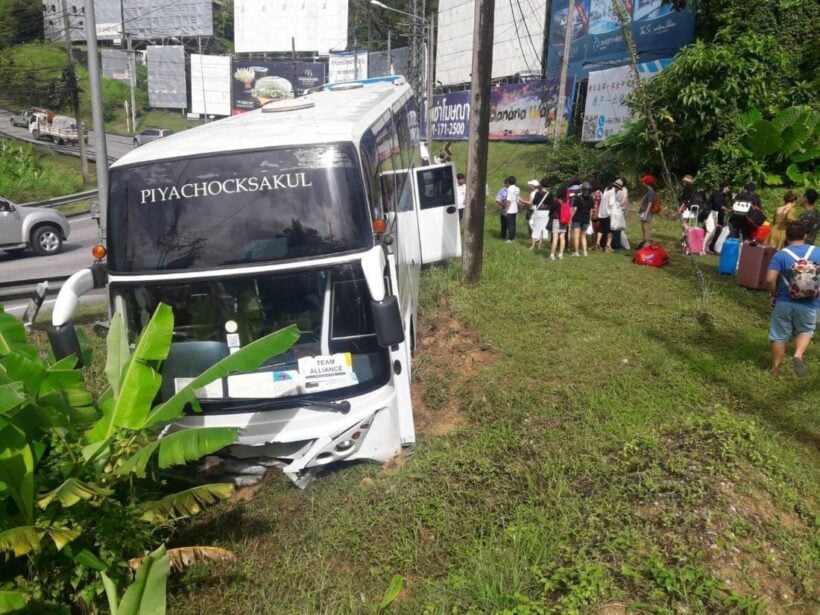 A tour bus driver has been charged with reckless driving after steering his tour bus, carrying 23 Vietnamese tourists, through the roadside barriers on the side of the road yesterday (September 16).

You’ll never guess what the excuse was… (roll the drums)…

Kathu Police were notified of the incident just after the hairpin turn, heading down the infamous Patong Hill road towards Kathu, near the Patong shooting range at 9am.

Police and rescue workers arrived at the scene to find the tour bus on the side of the road. 23 Vietnamese tourists were outside the bus. No injuries were reported.

The 56 year old bus driver, Pitak Mangpijan, told police that they were heading from a hotel in Patong to the Phuket International Airport.

He had made the trip up the hill out of Patong but heading down in Kathu he said there was a problem with the brakes. He claimed he was unable to slow down the bus. He decided to maneuver the bus on to the side of the road, crashing it through the guardrail into a small ditch.

The downhill turn is the tightest turn descending from the top of the hill.

The driver has been charged with reckless driving. He was fined 3,000 baht. The bus company has not been charged over the servicing of their buses.

780kg of kratom seized at Phuket Checkpoint in separate incidents