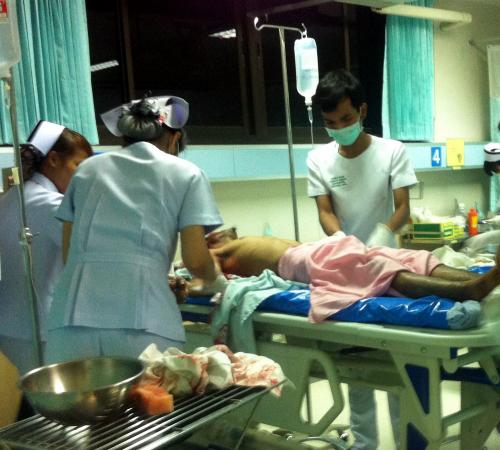 PHUKET: A man humiliated by a slap on the head in front of a group of people stabbed his assailant four times, sending him to the hospital.

The event transpired after an evening of drinking at a Burmese workers’ camp behind Phuket Simon Cabaret in Patong (map here).

After work yesterday evening, a 30-year-old man known as “Rambo” got together to drink with his friends, said Patong Police Deputy Superintendent Nikorn Choothong.

Hours later, when they were all drunk, a co-worker named Nai, 32, walked by.

“When Mr Nai refused, Rambo humiliated him by slapping him on the head in front of his friends and co-workers,” he said.

“Mr Nai walked away but came back a few minutes later with a pocket knife and stabbed Rambo – twice in the shoulder, once in the hand, and once in the stomach,” he said.

Rambo was taken to Patong Hospital. Mr Nai fled the scene and is still at large.

At last report, Rambo had been transferred to the better-quipped Vachira Phuket Hospital in Phuket Town, where he is still recovering from his injuries.

Phuket Special Report: One fateful night at the Longhorn Saloon