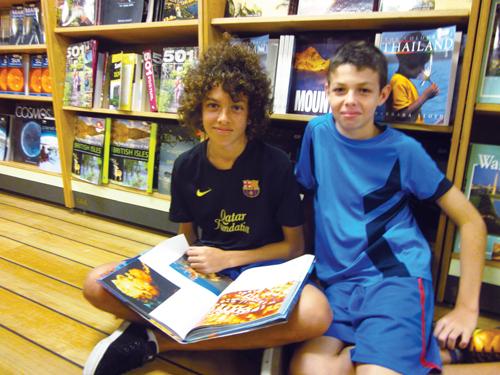 PHUKET: Logos Hope which docked in Phuket recently, is operated by the German charity GBA Ships, and has made over 1,400 port visits in over 150 countries and territories. During these port calls, since 1970, it has welcomed over 42 million visitors on board – bringing knowledge, help and hope to people around the world.

The book fair is on “deck four” of the ship. There are nine decks in total, and the ship is roughly half the size of the Titanic. There are more than five thousand books on topics ranging from science and technology, sports, hobbies and cookery to philosophy and children’s books, all of which are available for purchase at affordable prices.

“The place is nice, with air conditioning and [lots of] interesting books. The book I’m reading is about diving and it tells all about the diving sites and big fish. There is some really nice pictures of the fish and cool diving sites all around the world, including Phuket, the Similan Islands, and Koh Lanta,” young residents Brandon and Lolo Edouard, who were visiting Logos Hope, told the Phuket Gazette.

The head of Logos Hope’s literature department, based in Germany, is responsible for selecting and cataloging the the books on the ship. Over the years, they have refined the list of books to contain many popular and enjoyable titles.

As many as 400 unpaid volunteers from more than 45 different nations work shoulder-to-shoulder aboard the ship, with their shared mission to bring knowledge, help and hope to people around the world. Each year, another 200 volunteers join the crew, replacing those who have served their handed two year stint.

David Jankowski, a young Polish volunteer who was on the ship when it docked in Phuket, told the Gazette:

Cat Tse, a GBA Ships media relation officer, spoke about how the ship’s mission is funded: “We are a non profit government organization. Half of our donations come from family and friends who want to support the volunteers on board. All the volunteers, including the director and captain do not have a salary. About 25 per cent of the small profit from the book fair covers the cost for operating the ship and 25 per cent comes from individuals and partners from other organizations or companies that wants to sponsor us.”

In many ports, the Logos Hope sets up libraries, donates books and holds workshops on how to run a library. There’s also trainings on topics such as HIV and AIDS, first aid, hygiene and healthcare.

“We offer all sorts of education and training to those who come on board. The school for children on board follows the English education system. Training is provided according to what job category the person works in on the ship. For example, someone working in the kitchen will learn how to cook 1,500 meals per day,” said Ms Tse.

In Phuket, 30 crew members of the Logos Hope crew visited the Good Shepherd School to paint the whole school and help out with gardening. Other teams went to nearby small islands to provide healthcare and to teach English to children in partnership with World Vision.

“Everywhere we go, we want to help people in a practical way. Perhaps the greatest need we discover is not education or practical help, but just hope,” Lloyd Nicholas, Managing Director, Logos Hope concluded.