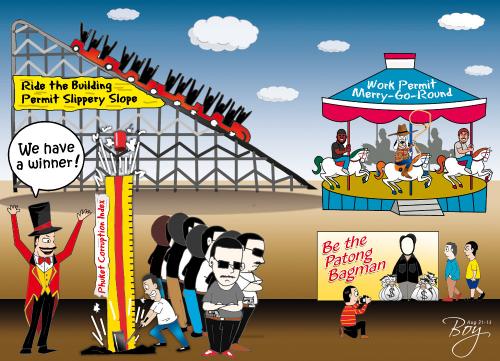 PHUKET: Corruption has publicly reared its ugly head as a topic of much heated debate, with one and all tacitly accepting that the situation in Phuket is out of hand. However, few are offering any realistic strategies to combat the problem at its roots: the well-entrenched mind-set that “playing by the rules is for suckers”.

The good news is that corruption, the island’s most fundamental problem, is finally getting the attention it deserves in the national and international media. Nonetheless, if concrete progress on tackling the problem is not achieved through efforts now underway, the only result will be more negative press for the island’s all-important tourism industry.

It’s true that Phuket’s tourism industry has been remarkably resilient over the years, having literally endured “hell and high water” (the 2004 tsunami disaster), horrific accidents (the OG269 plane crash in 2006), high-profile murders of foreign tourists and sustained environmental degradation, as well as many of the social ills that tend to occur in poorly regulated, rapidly urbanizing environments.

Despite all this, tourists continue to make their way here in record numbers. It appears possible that, if we seriously tackle these issues now, there is hope that Phuket can maintain its allure as one of the world’s premier resort-island destinations well into the future, at which time we would be able to look back at the current situation and view it simply as a period of “growing pains”.

However, reaching that stage will require some real leadership and genuine personal bravery, not the kind of blindfolded self-preservation and finger pointing that has appeared as a result of some recent allegations (story here).

Who might step up to the plate and take that role is anyone’s guess, as Thailand has not exactly excelled at producing grassroots leaders in its fight against corruption. Perhaps the country’s best-known anti-corruption figure is none other than Chuwit Kamolvisit, the former massage-parlor tycoon who went public with his own tale of paying millions of baht in bribes to cops, not initially on an ethical basis, but because he feared for his life (story here).

It is easy to dismiss corruption as an “inevitable” part of doing business and to point out that no country in the world is completely free of it. However, it cannot be ignored that the problem in Phuket has reached grave proportions and is extremely harmful to the island’s future.

For this reason it is imperative that these latest anti-corruption efforts not only achieve tangible results, but are also seen by the public as transparent and fair. It is only by convincing the public that the law applies to everyone equally that we can move forward to build the truly civil society that we are striving for.

Phuket Opinion: How to steer children as they surf the web