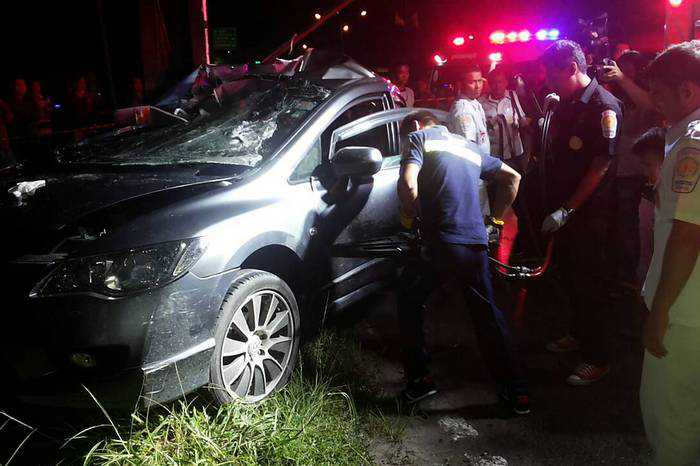 PHUKET: The marketing manager of Bangkok Hospital Phuket was found dead in her car after she slammed into a power pole heading southbound on Thepkrasattri Road last night.

Phuket City Police officers and Kusoldharm Foundation rescue workers found Nicha Chiwangkul, 46, from Surat Thani, pinned behind the wheel of her Honda Civic about 30 meters from the Bang Ku Intersection at about midnight.

Rescue workers took about 30 minutes to recover Ms Nicha’s body from the car.

A witness travelling north on Thepkrasattri at the time of the accident told police that he saw Ms Nicha’s car swerve toward the median. She then apparently over-corrected, likely trying to avoid impact, and ended up crashing into a power pole.

A staffer from Ms Nicha’s marketing team told the Gazette this morning, “We are so sorry for the family. Nicha was a very sweet big sister, and was very good at her job. We will miss her dearly. May she rest in peace.”

A public relations staffer told the Gazette that the hospital would release an official statement as soon as possible.

The body has been transferred to Vachira Phuket Hospital.