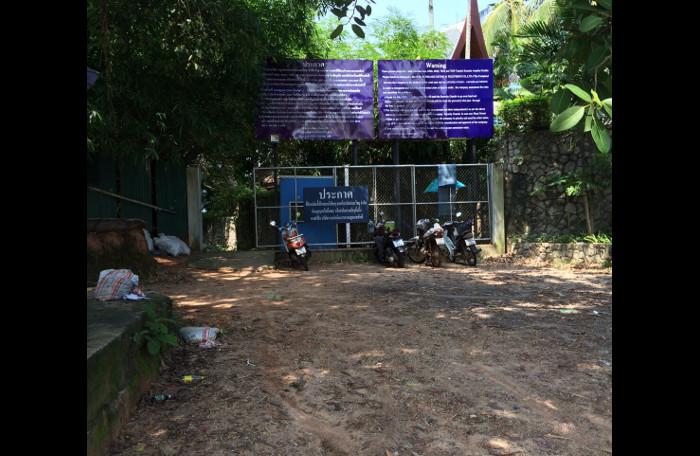 BBTV installed a sign at the entrance to the beach, stating that the company owns the land, and that the entrance fee is 100 baht per person from 7am to 7pm. The sign also lists land document title numbers and cites court case reference numbers.

The company said they will send security guards to collect fees from beachgoers, and will issue identification cards to the owners of businesses on the beach and their local workers to ensure that they will have access to the public beach free of charge.

“They started collecting a 20 baht per person entrance fee last year,” said a Laem Singh vendor who asked not to be named.

In 2012, more than 100 vendors from Laem Singh gathered outside Phuket Provincial Hall to demand that the government investigate Chanote title deeds for the beachfront land at the scenic cape.

A formal letter of complaint was handed to Dusadee Arayawuth, secretary-general of the Office of the Public Sector Anti-Corruption Commission (PACC), calling for authorities to investigate the land titles after BB&T ordered a fence to be built along the property’s boundaries (story here).

“We filed our complaint everywhere we could think of, including the Department of Special Investigations (DSI), the PACC, the National Anti-Corruption Commission (NACC) and local government offices,” the vendor told the Phuket Gazette. “Yet still there is nothing being done.”

“There are are nine shops down on the beach, and we’ve been using the access for over 30 years. We can’t do much, since [BBTV] claims ownership of the surrounding land,” he says.

Phuket Vice Governor Chokdee Amornwat told the Gazette this evening that he was aware of the issue and confirmed that provincial officials plan to meet this Friday to discuss the possibility of creating a public access pathway to the beach. He did not confirm whether use of that path, as required by law, would be free of charge to the public or not.

Just five months ago, Mr Chokdee himself gave the vendors at Laem Singh five days to remove all of their illegal beach chairs and umbrellas from the beach. He later claimed that that had been done (story here). However, the items were clearly back in place at the government-designated ‘virgin beach’ yesterday.

Asleep at the wheel: driver rams into shophouses in Krabi