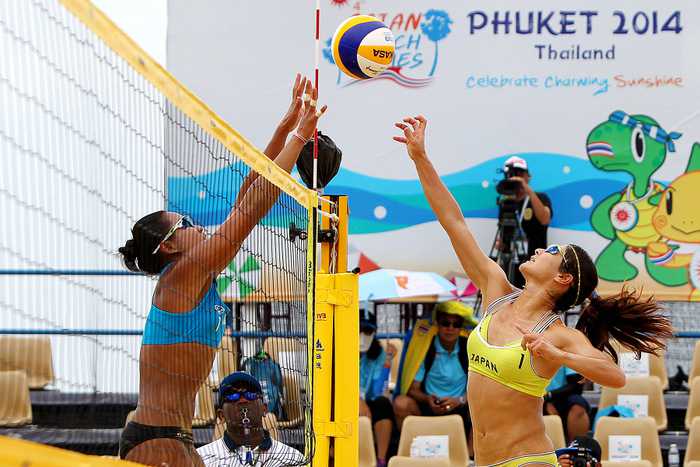 PHUKET: Thailand were given a scare yesterday when their grip on the Asian Beach Games crown was loosened by a strong surge from reigning champions China, who scooped nine golds to leapfrog into second.

At press time, the hosts lead the medal charge with 34 gold, 25 silver and 28 bronze medals, with China on 14 golds.

South Korean Jun Woongtae and China’s Huo Qi shared the honours in the beach pentathlon competition, with the former taking the men’s individual and the latter the women’s individual.

In the beach soccer, Thailand went down 3-5 to Uzbekistan in the 5th-8th play-off and will next play China in the 7th-8th play-off.

Playing under a blazing sun at Karon Beach, all Thai volleyballers scored convincing wins. Thailand B’s Yupa Phokongploy and Usa Tenpaksee tamed Hong Kong 2-0 in their final first-round match to top the women’s Pool D. Team-mates and reigning champions Varapatsorn Radarong and Tanarattha Udomchavee powered past Japan 2-0 to dominate Pool A. Sitthichai Sangkhachot and Nuttanon Inkiew came back to beat Japan in the men’s Pool E to top the preliminaries.

The top four teams in each pool make the cut for the knockout round.

“We played well in our last first-round match today,” Tanarattha said. “Japan are strong but they made more mistakes than us. It was extremely hot today and my team-mate Varapatsorn almost fainted. We’ve played too many tough matches recently – the Asian Games in Incheon, the Pattaya Challenge and here.”

Thailand drew a blank in the water skiing, which saw six gold medals on offer yesterday. China ruled the roost with three golds, while Japan, Singapore and Lebanon shared the remainder.

The 4th Asian Beach Games today will see a total of 14 gold medals on offer as follows: