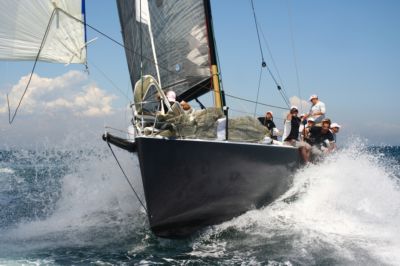 Miss Gillow’s photo of Living Doll on a charge running downwind at Geelong Race Week in Australia early this year has also won her tickets to the after-race parties each day of her stay.

Miss Gillow has been sailing as long as she can remember, but is best known on the island for being a regular skipper on Phuket-based Minx, which is jointly owned by her father Kevin Gillow and Mick Kealy, Commodore of the Ao Chalong Yacht Club (ACYC).

Her skills as a sailor have won her many victories in the ImageAsia ACYC Race Series, with Minx already high in the overall rankings in the Racing class just halfway through the series.

Miss Gillow will be racing on Minx in Phuket Raceweek and flying the white spinnaker of the The Evason Phuket & Six Senses Spa. Every year except last year, Minx has won the class the boat has been entered in at Phuket Raceweek.

Her fascination with boats continues off the water. Also obviously a budding photographer, Miss Gillow staged an amateur photo exhibition of the rebuilding of the Cariad at The Watermark bar and restaurant earlier this year.

The Cariad is a 110-foot gaff ketch more than a century old that is being rebuilt in a small boatyard in Satun. In her heyday, the Cariad won the 1898 Lisbon to Bombay Vasco Da Gama Cup.

As for her winning photo of Living Doll, modest Miss Gillow said, “I can’t believe it – what a lucky shot.”

The contest attracted a range of photos involving boats. Click here to see more entries in the photo competition.

Treasury Dept gets moving on ICEC