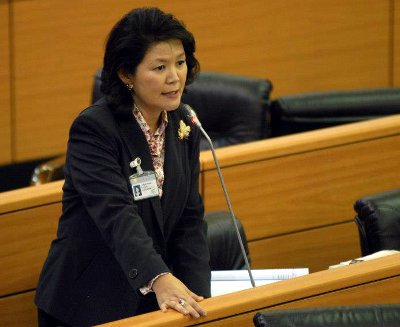 PHUKET: Phuket MP Anchalee Vanich Thepabutra yesterday stood in Parliament and called for the government to answer why the 2.6-billion-baht project to build a Phuket International Convention and Exhibition Center (ICEC) was cancelled.

The news of the cancellation was never announced by the government, prompting Ms Anchalee to break the news through her Facebook page last week.

Despite being lobbied to review the decision as she entered the mobile Cabinet meeting on Koh Samui last Sunday, Prime Minister Yingluck Shinawatra has remained silent on the issue.

Yesterday, MP Anchalee formalized the calls for the government to answer why the project was cancelled, by posing the question in Parliament.

She also asked the Cabinet to clarify exactly where the 2.6bn baht for the project, provided through a World Bank developmental loan, had gone.

Branding the Cabinet “narrow-minded”, Ms Anchalee explained that the funds for the project were secured through the Thai Khem Kaeng (“Strong Thailand”) fiscal stimulus program rolled out by the Democrat government under former PM Abhisit Vejjajiva.

“Former PM Abhisit devised a plan under which Bangkok would become the hub for Asean tourists and Phuket the gateway for international tourists, with 2.6bn baht allocated to building a Phuket ICEC and 2.3bn baht to building the Chiang Mai ICEC,” Ms Anchalee explained.

“At that time, people asked PM Abhisit to re-allocate the 2.3bn baht dedicated for the Chiang Mai ICEC to other projects, but he didn’t because he believed the ICEC would be a very good opportunity for the people of Chiang Mai to boost their income generated through tourism.

“Today, the Chiang Mai ICEC is a reality and ready to open,” she said.

Ms Anchalee argued that the 2.6bn baht dedicated for the Phuket ICEC did not affect the current budget as the funds were allocated years ago

“The Phuket ICEC was planned to open by 2015, in time for the AEC [Asean Economic Community].

“Also, the 5.7bn baht budget to expand Phuket International Airport, a project that is now underway, was approved with the understanding that the Phuket ICEC would be built,” she added.

“People all along the Andaman seaboard expect a lot from this project, that [the Phuket ICEC] will boost income generated through tourism. It is a project that is worth every single baht in investment.

“People are now saying that the government has ‘robbed’ them of the project. They want to know why the project was cancelled. They want an answer,” she said.

“The Office of Natural Resources and Environmental Policy and Planning [ONEP] has not approved the project because there was a problem with the EIA. They believed that the site where the ICEC was proposed to be built upon is a beach where turtles lay their eggs and as the last remaining ‘pristine’ mangrove forest in Phuket – that it should be a protected area,”he said.

“It could have extended the deadline so that the problems could be resolved, but it chose not to,” he said.

Krabi teens claim stabbing of British tourist was a “misunderstanding’