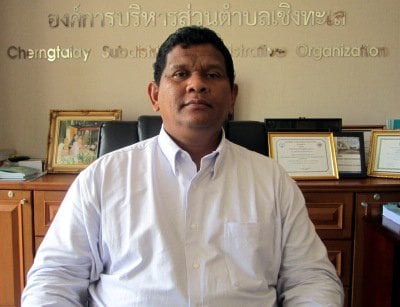 PHUKET: Ma-ann Samran, president of the Cherng Talay Administration Organization (OrBorTor), today expressed uncertainty as to whether the new year’s extravaganza would take place as promoted.

The event received much publicity by the arrival of Paris Hilton in Bangkok this week to promote the high-profile ‘beach bash’ to take place at Surin Beach from December 30 to January 1.

Mr Ma-ann, who noted that he had not been involved in any proceedings so far said, “I received an invitation to the Bangkok press release, but did not attend.

“It sound like an interesting event that the Tourism Authority of Thailand [TAT] are coordinating, but it requires official authorization from this end.”

Mr Ma-ann explained that the Guinness World Records and international media, including the BBC, CNN and NHK news networks, had been invited to the event and that the organizer expected “more than 50,000 tourists” to turn up.

“What is needed is a meeting, organized by Phuket Governor Maitri Inthusut, to discuss this very large event that should attract Thais and foreigners,” he said.

Mr Ma-ann pointed out that any event-planning meeting would require attendance by representatives from the TAT, the event organizers and the Cherng Talay OrBorTor.

“Once we have had the meeting, we will be able to give more details, [and] probably another press release will be issued,” he said.