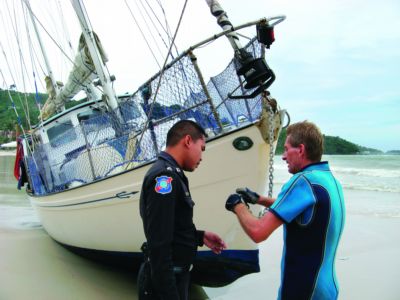 PATONG: The 38-foot sailboat Sultan washed up on the south end of Patong Beach about 1 am last night during a strong storm, waking owner Michael Wilson, who was asleep on the vessel when it hit the shore.

Mr Wilson, from the UK, had sailed 17 days alone through stormy weather from Sri Lanka before reaching Phuket yesterday. Upon inspecting his grounded boat he said he suspects the galvanized steel anchor line was mechanically cut, but admitted that he had no proof.

The Thai authorities are now helping Mr Wilson try to refloat the vessel but have thus far been unsuccessful. Mr Wilson said that he was disappointed no one would rent him a jet ski to try to tow the boat back into deep water.

He said he now hopes to gather about 40 strong men to help him push the boat out into deep water at the next high tide, which should come at about 1:30 am tomorrow.

“If I lose this boat I’ve lost everything, because this is all I have,” he told the Gazette.