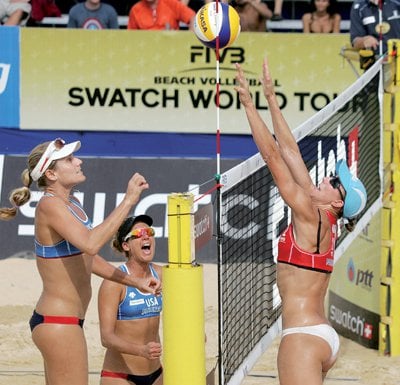 PHUKET: Schools beach volleyball received a top endorsement recently with the world’s number four pairing of Jennifer Kessy and April Ross from the USA offering to help promote the sport on Phuket.

Bob Selznick continues to do sterling work for youth volleyball on the island and his friendship with the 2011 FIVB Phuket Beach Volleyball finalists [Kessy and Ross] has inspired a relationship that will see the schools set up receiving vital equipment over the coming year.

“During the FIVB tourney, April and Jen, who are friends of mine from California, loved the PTT school girl tournament They thought it was great, and very nice for the girls to be exposed to the whole beach volleyball scene,” Bob explained to the Gazette.

“They came and watched a few of the matches when they found time. It’s the only stop on the world tour where they did that,” he added.

“As of now, they are sending volleyballs and tops for the girls, with more stuff to come in the future and that they said they would like to help support me in organizing any tournaments in the future,” said Bob.

Jennifer and April have won the Phuket FIVB tournament twice and are extremely popular and important participants at the annual event. It seems their ties with Phuket will continue and their influence along with Bob’s will hopefully encourage considerable growth in youth volleyball.

Phuket Sports: PYSC get the cream of Cats