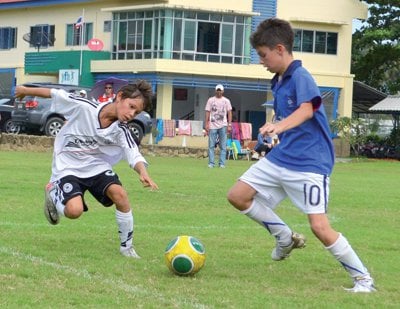 PHUKET: Phuket’s Fair Play League (FPL) moved venues to take advantage of the excellent facility at Youth Football Home in Thalang for the second round of the competition.

With two immaculately kept grass pitches at the ground, participating boys and girls enjoyed an afternoon of great football.

In the U11 Division, spectators were treated to three hard-fought games with every player giving their all to earn their team victory.

In the first match, France looked as though they would secure all three points by taking a two-goal lead against Germany White, but in true Teutonic spirit the Germans fought their way back into the match to claim a share of the points with 4-4 draw.

The second match saw the Copa America battle between Brazil and Argentina. Inspired goalkeeping and opportunistic striking helped the Brazilians to a 4-0 win over a determined, but in the end unfortunate Argentine side. Thailand’s all-girl team and Germany Green played out the last match in the U11’s Division with the Kingdom’s representatives just missing out on a draw after a 4-3 defeat to a confident German side.

The U14 Division matches were a little more one sided. Germany Green continued their excellent goal-scoring form with a 7-3 win over Brazil. The encounter between France and Argentina in the second match was notable for a double hat trick by the number seven who scored all of France’s six goals in their 6-3 victory. Thailand achieved their first win of the campaign with a 7-3 scoreline over Germany White in the final match of the day.

The Fair Play League will resume at the British International School on February 5.

World number four pair set to give back to Phuket schools

Phuket Sports: Krabi down the Lomas