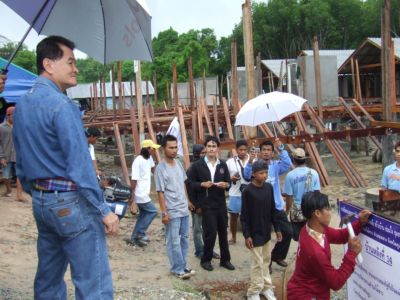 MAI KHAO, PHUKET: Work to rebuild 17 houses that were burned to the ground in a fire at a sea gypsy village in Phuket at the end of June restarted yesterday after a two-month hiatus.

The rebuilding of the sea gypsy houses started in July, soon after the fire, but ground to a halt shortly afterwards.

He blamed the slow ‘progress’ on delays in the delivery of building materials arranged by the Phuket Provincial Administration Organization (OrBorJor).

The work will be completed next month, he says.