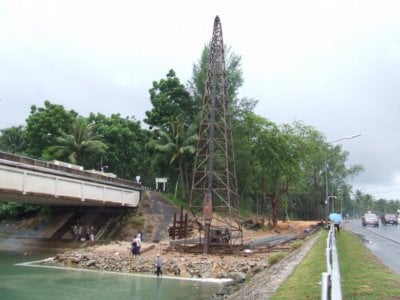 PHUKET: Phuket yachties will be pleased to know that a 300-million baht deal to build a new Sarasin Bridge includes raising the old bridge to give up to 10-meters’ clearance beneath all three bridges.

The old Sarasin Bridge will become a car-free tourist attraction once construction of the third bridge is complete.

Italian-Thai Development Co, which built Sarasin Bridge and the newer Thep Krasattree Bridge that runs alongside, signed the contract to build ‘Sarasin Bridge II’ in June.

Construction work began last month and is expected to take 720 days and be ready for traffic in August 2011.

The Sarasin and Thep Krasattree bridges span the Pak Pra channel and are the only means of road access to Phuket from the mainland. The bridges are used by both vehicles and fishermen.

The new span will measure 650 meters long, 12 meters wide and afford 10-meter clearance to vessels in the channel below.

The 52-year-old Sarasin Bridge will become a pedestrian walkway, 100 meters of which will be roofed over to provide shade.

The bridge will also be raised by five meters to give it a clearance of ten meters, allowing large yachts and commercial craft to pass beneath all three bridges.

The Thep Krasatree Bridge has a clearance of nine meters.

Piers on which the new span is constructed will be set one hundred meters apart; the old bridge’s piers are just 50 meters apart. Arun Sanae, director of Phuket’s Provincial Highways Office, which is responsible for the new span, described it as ‘a modern design.’

In addition to the bridge construction, 500 meters of roadwork on either side of the spans will be performed to redirect traffic away from the old and to connect the new bridge to the existing highway.

The present Sarasin Bridge – named after one of Thailand’s ’50s-era military strongmen – has long been an object of terror and romance, not only in Phuket but throughout Thailand. Tales are still told of the kidnap and sacrifice of unfortunate maidens during its construction, and since completion it has turned into a kind of Lovers’ Leap. A film was made recounting events leading to the end of one ill-starred love affair – but several couples and many individuals have decided to end it all by jumping from the bridge.