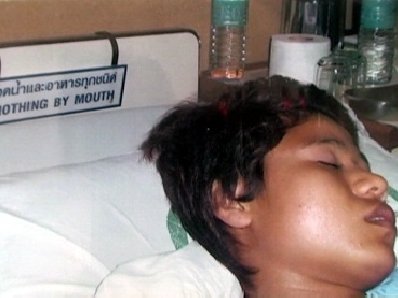 Sawang Tonglaw, who heads a group of vendors on Surin Beach, and 15 fellow vendors, took their case to Phuket Provincial Hall today, citing a history of intimidation and death threats against them.

The final straw came on Friday when Mr Sawang’s daughter, Maiwadee Tonglaw, 24, was viciously attacked while selling fruit on the beach.

Ms Maiwadee was selling to Thai and foreign tourists at about 10am in front of a beach restaurant when six men representing the restaurant approached her, Mr Sawang said.

The men threatened to kill her if she didn’t stop selling fruit in front of the restaurant. They then began punching her and repeatedly beat her with a chair until she was unconscious, Mr Sawang said.

The men also threw her fruit and money into the sea, he added.

Ms Maiwadee remains in Thalang Hospital. She suffered injuries to her neck and head.

Although this was the first time she had been physically attacked, Mr Sawang said that his daughter had in the past received repeated death threats from the owner of the restaurant as she walked by selling fruit.

Ms Maiwadee refused to be intimidated and eventually faced the wrath of the owner, the group of vendors alleged.

At their meeting today with Vice Governor Weerawat Janpen and other officials, the Surin Beach vendors explained that many of them had been threatened by staff of the same restaurant.

“The owner of the restaurant always shows himself to be some kind of mafia by threatening beach vendors,” Mr Sawang said.

“We have been selling food on Surin Beach for decades out of stalls or by walking along the beach. This restaurant is [relatively] new,” he explained.

The vendors, fearing that they are getting a raw deal, asked the provincial government to assist in “controlling” the restaurant in question, and to investigate whether or not it is operating in a proper zone.

They also asked that the “mafia” who beat Ms Maiwadee be prosecuted, and asked for security measures to be put in place for the protection of local people and tourists.