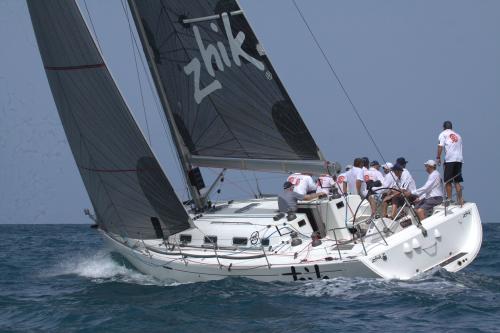 Despite breakages and damage to six boats on the first day of the event, all were fixed and back in action yesterday with a full 37-strong fleet out racing on-the-water.

The Cruising and Classic classes headed off on a scenic island tour of Chalong Bay out to Bon Island and then rounded Lone Island before moving downwind to the finish.

The other classes sailed a variation of the same course, taking in Bon Island and Coral Island before being given a second race for the day, a Windward/Leeward in the softening breeze.

First off the blocks were IRC Racing I with the TP52 Oi! (Peter Ahern) taking the pin end of the line together with Wan Marang (Jaray Tipsuk).

Katsu tacked early to take the other side of the course and when they came back together Oi! had made the best of the wind and took an early lead on-the-water, going on to lead through the finish to take Line Honors by 20 minutes and the win on corrected time by five.

Katsu (Ben Copley), again played bridesmaid ahead of Wan Marang which despite finishing third was only five minutes off the pace after almost three hours of racing.

In Race 2, things didn’t go to script, and the racing was a much closer affair. Oi! continued their winning ways though, claiming victory by less than a minute on corrected time from Wan Marang with Katsu falling off the pace and finishing third.

Wan Marang owner, Kevin Whitcraft, was not on the boat on day one and his arrival for day two has brought the best out of the crew, as can be seen on the results sheet.

In IRC Racing II consistency was the name of the game, with the top three spots filled by the same boats in both races yesterday. Fujin (Peter Sorensen, with Steve McConaghy onboard) added two more wins to their two wins on Day One to take a superior lead at the halfway point, while Stuart Williamson’s Skandia Endeavour of Whitby will no doubt be happy with two second places yesterday. And while Phoenix (Neils Degenkolw) scored two third places, less than 10 seconds separated second and third places in both races yesterday, ensuring all is to play for on the final two days.

Close startline action with many on course sides (OCS) on Day Two of the 2013 Cape Panwa Hotel Phuket Raceweek.

In IRC Cruising, the erstwhile winner at the end of Day One’s race, Irish entry Peter Wood’s Windstar, stayed on top of the class yesterday, with a fine win of more than 10 minutes, ahead of two Aussie contenders, Mike Crisp’s Sail in Asia Venture and Rob Azzopardi’s Dreamtime, lying second and third, respectively.

In the long-distance race for the Firefly 850 Sport class, three boats were called OCS at the start. Tactics played a big part over the race, with the lead changing hands many times. Despite being one of the boats called OCS at the start, it was Twin Sharks (John Newnham) who emerged the clear winner by seven minutes. Twin Sharks went on to make it two-from-two with a narrow victory in the second race and sits at the top of the series standings unbeaten.

Elsewhere, in the Multihull Racing class, Aussie Alan Carwadine’s Asian Catamarans Hurricane racked up a third and first. But, John Coffin’s Java, with a second and third, leads this hotly contested class from Carwadine. Peter Gallagher’s DaVinci are equal second overall at the end of four races.

It is only split seconds separating these flying felines across the finishing line.

In the Classic class, those venerable old war-horses of the sea lanes, Thai entry Laurie Piper’s Atlanta squeezed in ahead of Captain Bao’s Seraph, leaving Day One’s winner, Simon Morris’ Sirius, languishing in third place. All three are tied on four points in the overall standings with two more days of racing to go.

The Phuket Gazette and PGTV are media partners of The 2012 Cape Panwa Hotel Phuket Raceweek.