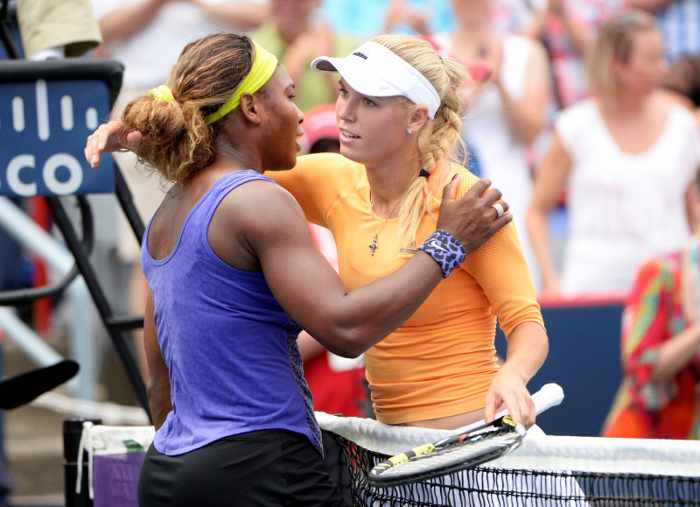 PHUKET: World number one Serena Williams and sister Venus will renew one of sport’s greatest sibling rivalries after posting quarter-final wins at the Rogers Cup on Friday to set up a milestone showdown on the Montreal hard courts.

Serena kept her title defence on track, rallying for a 4-6, 7-5, 7-5 win over Caroline Wozniacki, while Venus booked her place in the final four with a comeback victory of her own, beating 14th seeded Spaniard Carla Suarez Navarro 4-6, 6-2, 6-3.

It will mark the 25th time the sisters have squared off, and the first since a 2013 semi-final clash in Charleston won by Serena.

While it is a match-up tennis fans always look forward to, for the sisters it is something they could live without.

“I definitely don’t like playing her,” explained Serena. “I think I’ve lost to her more than anyone on the tour. Definitely not a fun match.

“She does everything well, so it’s not an ideal match-up for anyone, to be honest.”

Despite the high praise, Serena holds a 14-10 advantage over her older sister in head-to-head meetings and has come out on top in their last five encounters, including the 2009 Wimbledon final.

But the sisterly clashes, which were at one time almost a regular and welcome occurrence on tennis courts across the globe, have become rarer-and-rarer.

In fact, Saturday’s meeting will be just the second in the last five years.

Serena, who won the title last year in Toronto, is back in Montreal for the first time in 14 years, while Venus is making her first-ever visit to the belle province and now stands as the road block in the way of her sister’s title defence.

Both Serena and Wozniacki arrived in Montreal in winning form.

Williams, a three-time champion on the Canadian hard courts, picked up her 61st career title last week at Stanford, while Wozniacki was champion in Istanbul. Neither had dropped a set on route to the quarter-finals.

The match served up plenty of intrigue, with Williams, the defending champion and current world number one, going against a former number one and former champion who has her own love affair with the Montreal hard courts where she had built a 9-1 record.

The muscular American was certainly not going to outwork Wozniacki, who is training to run the New York City Marathon in November, but Williams had enough weapons and experience to see off the dangerous Dane.

At 34, Venus continues to prove she remains a force on the court out-lasting Navarro, who at 25 is nearly 10 years her junior.

For the first time since 2010, Venus has reached multiple finals claiming her 45th career title in Dubai.