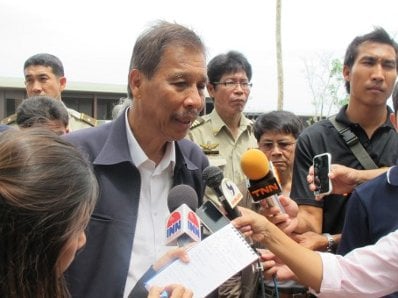 PHUKET: A well-known wildlife activist has told the Phuket Gazette that he supports the planned merger of the Royal Forest Department and the Department of National Parks (DNP), Wildlife and Plant Conservation.

The merger was announced on July 11 by Preecha Rengsomboonsuk, who heads the Natural Resources and Environment Ministry that controls both departments.

Once the merger gets the green light from Cabinet, it will take about a year to draft the legal framework, which will then be put before Parliament for final approval, Mr Preecha said.

“The two departments should [become one] because the scope of their duties is overlapping. With the merging, the work process will be streamlined,” he said.

Currently, crimes that take place on protected forest land come under the jurisdiction of the Forest Department, whereas those that take place inside national parks, wildlife reserves or non-hunting areas fall to the National Parks Department.

Edwin Wiek, founder of the Wildlife Friends Foundation Thailand, agreed that the merger was a good idea.

“The [dual department] idea was introduced in 2001 by Plodprasop Suraswadi to make things easier, according to the American model. But it doesn’t work in Thailand. It’s overlapping everywhere. It’s actually a big headache for everybody, including provincial governors, who do not know who they have to turn to whenever there is encroachment or illegal logging. If you are driving around with a truck full of illegally fallen logs, who is going to arrest you?”

“Actually it is the work of the Forestry Department, but the DNP can claim they have information that it [the illegal logs] came from one of their areas, they can get involved as well. Or if you pay bribes, you have to pay bribes to both departments, otherwise you won’t get away with it.

“It’s all very unclear, so it’s much better if they just become one department,” said Mr Wiek, whose foundation filed the complaint that led to the arrest of two men for illegal possession of three lorises in Phuket earlier this month.

It is also hoped that the merger will help the government in its ability to end encroachment on state land.