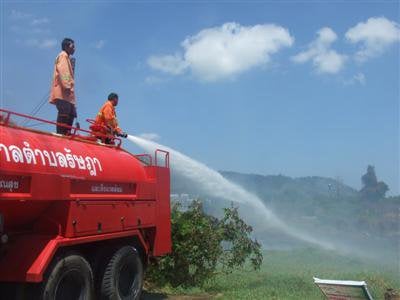 RASSADA, PHUKET: Phuket firefighters have been battling wildfires along the bypass road in recent days.

The first broke out in a field opposite Tesco-Lotus in Rassada at about noon on Sunday.

Rassada Municipality dispatched four firetrucks and 20 firefighters to try to douse the flames, which were fueled by thick, dried out vegetation.

“As we arrived there to put it out we saw one guy who had been burning trash in the area fleeing the scene,” one firefighter said.

Assisting were about 20 officers from the Phuket Provincial Wildfire Prevention Unit and some 10 local volunteers.

Fortunately the flames did not spread to structures on nearby Songkhla Road, which is separated from the lot by a two-meter-high concrete wall. A recycling warehouse on the road nearby is filled to capacity with paper, plastic and other flammable materials.

Firefighters thought they had the fire under control late Sunday, but it reignited three more times: yesterday morning, again at about 8:30 last night, and again at around noon today. The latest flare-up was extinguished at about 2pm today.

“It is very difficult to stop the fire because we can’t see it smoldering beneath the surface, and this is why it continues to reignite… The best method is to spray the entire area to ensure everything is saturated,” one firefighter told the Gazette.

An even larger fire broke out at about noon today opposite the Chevrolet showroom on the bypass road northbound, also in Rassada.

Firefighters continue to battle the blaze this evening, but say they are sure it can be contained. Already about 30 rai have burned up.

There have been 15 fires in Rassada this month alone.

“This year is worse than last year because the weather is very hot and dry. When people burn their trash, it is very easy for the fire to spread and become uncontrollable,” the firefighter said.

Earlier this month, there was a fire at a recycling plant in Wichit.