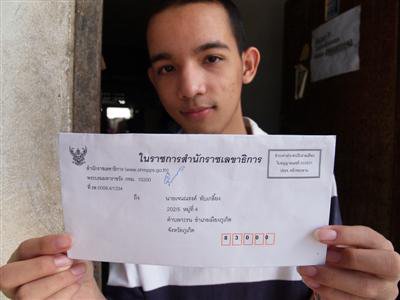 PHUKET: After writing a letter to HM King Bhumibol Adulyadej asking for help, a sixteen-year-old leukemia patient has been granted 800,000 baht to pay for medical treatment.

Jenarong Tapklaeng was first diagnosed with leukemia about one year ago. Due to his illness, he has been unable to attend classes at Dowroong Wittaya School for over a year.

In a letter he addressed to the Bureau of the Royal Household in November last year, Jenarong wrote that his mother did not have the money required to pay for his expensive treatment.

“I just want to be a normal boy…go to school and make friends,” he wrote adding “I have to fight the pain all the time…sometimes I cry alone because I don’t want to worry my mother.”

Last month, Phuket Governor Wichai Phraisa-ngop received a letter from the Bureau of the Royal Household, instructing him to find financial assistance for Jenarong and his mother.

The Phuket chapter of the Thai Red Cross Society, the Phuket Social Welfare Office and Karon Municipality are now helping Jenarong get the needed treatment in the chemotherapy ward at the Prince of Songkla Hospital in Haad Yai.

Doctors at Vachira Phuket Hospital and PSU Hospital are now conducting tests to see if Jenarong could benefit from stem cell donations from the bone marrow of his 14-year-old sister Natthakarn.

The 800,000 baht cost of the testing and therapy, if it goes forward, will be paid for by the Red Cross.

According to the Red Cross, Jenarong’s mother Wasuthida earns just 800 baht a month washing clothes out of her Kata home.

“I didn’t think we would get a reply. Jenarong didn’t even put a stamp on the letter,” she said.

“I’m so happy and I want to thank HM The King for helping my boy,” she said.