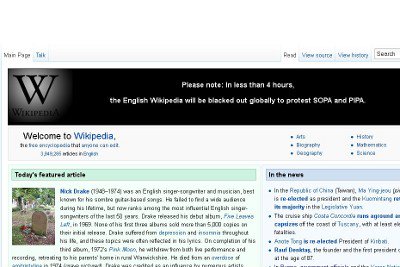 PHUKET: The Phuket Gazette would like to inform its readers that English Wikipedia will be shutting down at noon today (Phuket time) to protest proposed legislation in the United States.

The proposed Stop Online Piracy Act (SOPA) in the US House of Representatives and PROTECT IP Act (PIPA) in the US senate “if passed, would seriously damage the free and open Internet, including Wikipedia,” wrote Sue Gardner, Executive Director of the Wikimedia Foundation.

This will be the first time that the information giant has staged a public protest of this nature. There are concerns that by making a public stance the foundation has abandoned the neutrality previously expected of the site by its millions of users.

“Although Wikipedia’s articles are neutral, its existence is not,” Wikimedia Foundation board member Kat Walsh recently wrote.

“My hope is that when Wikipedia shuts down on January 18, people will understand that we’re doing it for our readers. We support everyone’s right to freedom of thought and freedom of expression. We think everyone should have access to educational material on a wide range of subjects, even if they can’t pay for it.

“We believe in a free and open Internet where information can be shared without impediment. We believe that new proposed laws like SOPA and PIPA, and other similar laws under discussion inside and outside the United States, don’t advance the interests of the general public. You can read a very good list of reasons to oppose SOPA and PIPA here, from the Electronic Frontier Foundation,” wrote Ms Gardner.

For a more detailed explanation of why the world-renowned information source is shutting down in protest, see their website by clicking here.