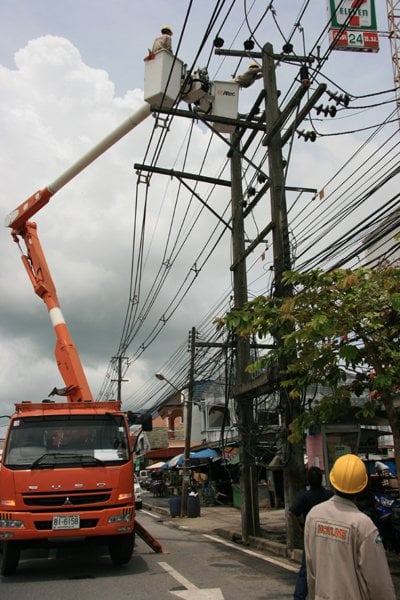 PHUKET: Residents and businesses across the island are likely to be subjected to fewer scheduled blackouts in the coming years, the Phuket Provincial Electricity Authority (PPEA) has told to the Phuket Gazette.

However, with no blackouts scheduled until at least the end of the month, PPEA Operations Chief Yongyuth Podbutr said that his crews were carrying out less maintenance work than ever before.

“We used to have to cut the power off [for scheduled blackouts] five to six times a month, but lately it has been only about once or twice a month,” Mr Yongyuth said.

“There are not as many problems as before. Now we only have to install new cables and replace old ones,” he said.

The schedule for organized blackouts for October had yet to be finalized, but will be announced on October 1, Mr Yongyuth added.

“We announce scheduled blackouts on every local cable TV channel and on local radio stations. People who are worried that a scheduled blackout will affect their area can call the PPEA Operations Department at 076-224029,” he said.

Where the Phuket buffalo roam