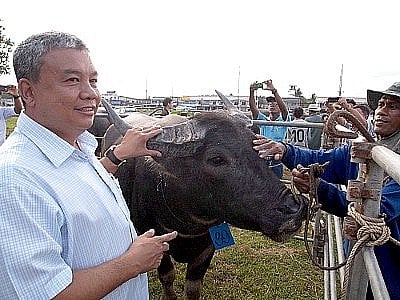 The event, organized by the National Farmers Council (NFC) Phuket office and Srisoonthorn Municipality, with support from the Phuket Agricultural Office, was held at the field near the Heroines Monument in Thalang.

“This is the first Thai buffalo contest we’ve held in Phuket. The contest aims to support the rearing of buffalo in Phuket and support Phuket agrotourism,” explained NFC Phuket chief Somchai Sakulchit.

“I believe the contest has helped promote awareness of the knowledge and experience of local farmers and of the buffalo conservation effort in Phuket. The more Phuket tourism grows, the less space there is to rear buffaloes,” Mr Somchai added.

Sintop Kimsentun, a representative of buffalo herdsmen in Phuket, told the Phuket Gazette, “There are few more than 900 buffaloes in Phuket. Most of them are in Thalang.”

However, he added that efforts to preserve the number of buffaloes on the island needs support from the government.

“In Phuket, the focus is only on tourism; little is done to help farmers who rear buffalo. We are also having difficulty in obtaining medical supplies for our herds and assistance with our artificial insemination programs,” he added.