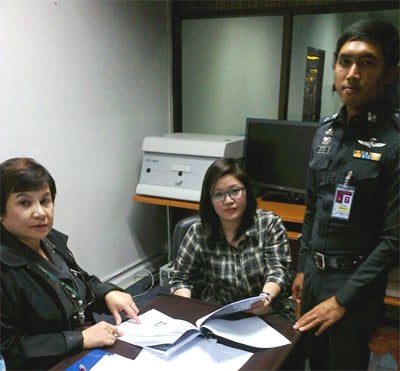 PHUKET: Following the arrest of a woman wanted by authorities in Bangkok for human trafficking charges, Phuket Airport Immigration officers revealed how they caught the suspect before she could fly out of the country.

Phuket Airport Immigration officer Lt Col Wannee Songchaisanguan said that Snr Sgt Maj Wanchai Narin was on duty in the departure hall on September 14 when a woman approached his desk and handed him her Thai passport.

“Sgt Maj Wanchai scanned her passport and was immediately notified of an outstanding arrested warrant. He informed me and we escorted her to the office for questioning,” Col Wannee explained.

Immigration Officers had a problem: the woman in their office, who was intending to travel to Bahrain via the United Arab Emirates that night, was travelling with a passport in the name of Ms Natthakarn. This was at odds with the arrest warrant notification which was for a woman named Dujdao Yarana.

According to the notification, the arrest warrant was issued by the courts on August 29, charging Ms Dujdao with collaboration in human trafficking connected with the sex trade.

“Ms Dujdao denied that she was involved with human trafficking, instead claiming she was a victim of the business. She told us that she was going back to Bahrain to take action against the business operators. However, we contacted the Anti-Human Trafficking Department (AHTD) in Bangkok and they were able to confirm, by her appearance, that we were holding Ms Dujdao,” said Col Wannee.

The AHTD emailed Phuket Airport Immigration officers copies of all the information necessary to positively identify the woman as Ms Dujdao, including the arrest warrant, ID card and certificate detailing her change of name.

“After showing the documents, Ms Dujdao accepted that her photo was on the documents but she still denied the charge,” said Col Wannee.

“Ms Dujdao “Champagne” Yarana was taken at 1.30am to Tah Chat Chai Police Station, where she was met the next day by AHTD officers who escorted her to Bangkok.

Where the Phuket buffalo roam