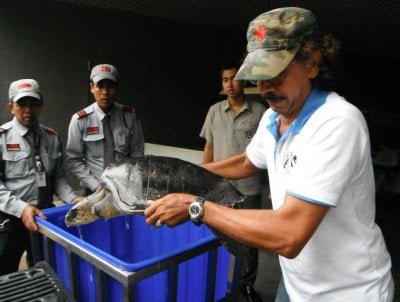 “We received a report from The Mai Khao Marine Turtle Foundation that the turtle had washed ashore in front of Renaissance Phuket Resort & Spa – Marriott at Mai Khao Beach,” Dr Patcharaporn Gaewmong, a veterinarian for the Endangered Species Unit (ESU) at PMBC, told the Gazette

“We retrieved the turtle and brought it back to our center for treatment. Staff here cleaned its wounds and started it on an antibiotic regime. We will continue to monitoring its health,” she said.

An examination by ESU staff, revealed that the turtle had cuts to its front left flipper, which Dr Patcharaporn thinks was probably as a result the young turtle fighting to free itself from discarded fishing net.

“Some 30 turtles have been found washed ashore since June. Most of those had cuts to their flippers from fishing nets,” she said.

“We are trying our best to save them.” she added.

Those interested in making a difference by cleaning the reefs of Phuket and the surrounding islands of rubbish and discarded fishing nets are encouraged to join Go Eco Phuket, the Phuket Gazette and hundreds of individuals in what is expected to be the world’s biggest coral reef cleanup this Sunday.

Thai Navy in Phuket does it “Gangnam Style’