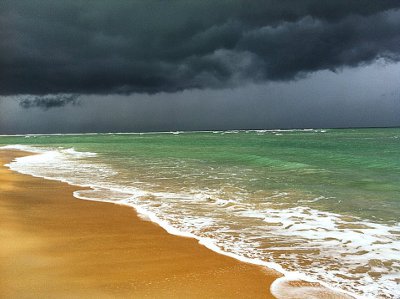 PHUKET: Rescue workers have recovered the body of the missing 17-year-old student who was swept away by strong waves when he entered the surf while with friends at Nai Yang Beach on Tuesday.

Nithipol Lorlaem’s body was found this morning, about 500 meters from the police box near the beach, where he was last seen in the strong surf.

“A villager reported the discovery at about 6:30am,” he added.

Mr Nithipol’s friends told lifeguards that on Tuesday afternoon they went to the beach and sat near the police box to eat meatballs.

“They told us that Mr Nithipol accidentally dripped some meatball sauce on his shirt and he wanted to wash it off before going home, so he went into the water,” explained Mr Jit.

“The area in front of the police box is a ‘no swimming’ area. We marked the area with red flags to indicate this,” he added.

Mr Jit explained that lifeguards were on patrol at the time of Mr Nithipol disappearance, but not in the police box area.

“They told us that it was within the national park area [beyond the entrance fee collection booth]. However, from time to time we still send lifeguards to patrol that end of the beach in case anything happens,” said Mr Jit.

“Our lifeguards patrol the beach from 9am to 7pm every day. On that day, we received a report from beach vendors that a boy had disappeared in the surf in front of the police box at about 6:30pm, so we came running from our station near the boyscout camp to help search for him,” he said.

Sirinath National Park chief Cheewapap Cheewatham, however, today denied that his park rangers told the lifeguards they were not allowed to patrol the beach within the park boundaries.

“It might be a misunderstanding. We never told the lifeguards not to work in the area in front of the police box. That area is a red-flag zone, which indicates it is a ‘no swimming area’, so we need lifeguards on duty there,” Mr Cheewapap told the Gazette.

“I have to issue a letter to the lifeguard service company to clarify any misunderstandings and ask for their cooperation in having their lifeguards to patrol that area,” he said.