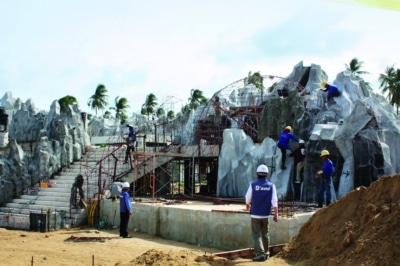 Construction began last year and is expected to be complete by December.

The water park is part of the West Sands five-star resort complex and was designed by Whitewater Industries, a world leader in water park design and a major player in the US water park industry, including Disney.

The overall cost of the project is 500 million baht (US$14 million) with construction and engineering being overseen by Danu Design and Hadyai Nanthakorn Co Ltd.

Covering an area of 22,400 square meters, the developers say the park will be able to accommodate 2,500 visitors a day.

“We are highly confident that West Sands Water World will take little time to become the new major attraction and a must-do activity for travelers who have landed in Phuket,” said Project Director Barry King.

The park will feature regionally-themed sections which include African, Asian, Turkish, Northern European, North American and Incan zones. There will even an area dedicated to the sub zero temperatures of the North Pole, although ice water in this section is yet to be confirmed.

The interactive structure of the water park will include several water slides, a 335-meter-long lazy river, a wave pool, a play pool and spa area as well as ‘Boomerango’ and ‘Super Bowl’ premium rides.

The latter two are currently all the rage in the US, with Boomerango winning the ‘best new ride’ award last year.

Father killed in bid to save couple wired for death