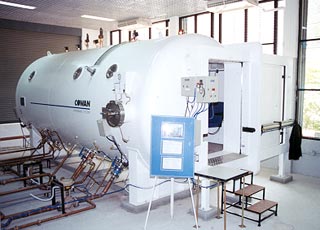 PHUKET TOWN: Deputy Public Health Minister Dr Surapong Suebwonglee today announced that Wachira Phuket Hospital has set two public health care firsts for Thailand. It is the first to have a government-owned hyperbaric chamber, and the first to treat HIV patients under the 30-baht medical scheme. Dr Surapong officially opened the hyperbaric chamber, which will be used to treat divers suffering from decompression sickness – also known as DCS, or the bends. DCS is usually incurred either by diving too many times in one day or by surfacing too quickly from a dive. Dr Surapong said, “Each year, about 10-20 people in the Andaman region, both Thais and foreigners, suffer from DCS. [Until now] these patients have had to go to private hospitals in Thailand or to hospitals in Singapore, which are very costly. “This chamber is very cheap when compared with the private sector. Private treatment costs about 20,000 baht per hour and some patients need to be in the chamber for up to five hours. The hyperbaric chamber here costs about 3,000-4,000 baht per hour,” he said. The Wachira chamber and the new building it is housed in cost about 48 million baht. It will also be used to treat other non-diving-related conditions such as cerebral edema, crush injuries and poisoning from carbon monoxide or other dangerous gases. Dr Surapong also said that the Health Ministry has plans to develop Phuket into an international center for treating diving ailments, though he did not expand on how the government intends to achieve this goal. Dr Surapong also noted that Wachira Hospital is the first in Thailand to include HIV patients in the 30-baht medical scheme. The hospital, which currently issues 33 patients with government-produced anti-AIDS medications that have prevented those patients’ conditions from deteriorating, has done so since April under the 30-baht scheme. According to government statistics, up to June 30 this year, 617 people have died of AIDS in Phuket and 1,833 people in the province are recorded as being infected by HIV.