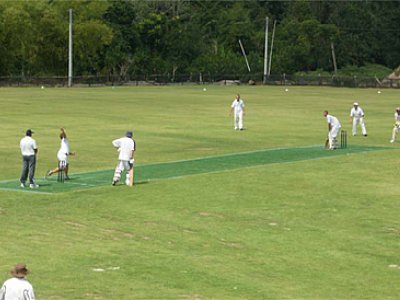 Both team squads included several new players which have bolstered their sides for this season.

LLL, which mainly comprises British International School (BIS) teachers, included a number of players sporting large mustaches in the style of Merv Hughes and David Boon (former Australian cricket stars). If it were not for the fact that they were playing the Village, “The Village People” may have been an appropriate name for LLL.

The Village won the toss and elected to field. LLL got off to a shaky start losing Dave Langley (2), Steven Hill (1) and Alf Hodges (5), and at three wickets down for 27 they needed to steady the ship.

Worthy of note was the sportsmanship of Langley when the Village appealed for a caught behind. The umpire didn’t raise his finger, but the opener shouldered his bat and walked honorably back to the pavillion.

Another mini collapse occurred when Thacker was dismissed, followed by Chris Green for a duck, and with six wickets down for 78 runs, LLL were scrambling to survive reaching the 20 over drinks break.

Neil Culpan, one of the new recruits in LLL was particularly impressive and scored 39 runs before being given lbw off the bowling of Tom Gordon. LLL innings finally expired upon his departure at 152 runs from 30.3 overs.

Kevin Quilty (42) and Martin Platts (5) put on a quick-fire opening stand of 40 runs before Platts nicked one through to first slip. Quilty had to face the heat from left arm pace-man, Neil Culpan, and suffered a bruising ball to his thigh during their battle.

Culpan proved more than a handful with his left arm pace bowling, and his first spell of five overs resulted in a meager six runs. Unfortunately, 16-year-old Rhys Young failed to find his line and the umpires removed him from the attack for bowling three beamers in his first over.

Coming in at first change for the Village was the tall frame of former Singapore cricket club player Justin White. The big-hitting White (61 not out) and Quilty put on a match winning 72 run partnership off just 56 balls.

Quilty eventually fell with the score on 112. Martin Foster (20 not out) joined White, but struggled with his timing trying to get his eye in. However, they managed to keep the high run rate ticking over and the Village went on to secure a deserved victory, hitting the winning runs in the 23rd over for the loss of only two wickets.

Man of the match was Justin White, with Culpan and Gordon 2nd and 3rd pick, respectively.

The ACG will host a festival of cricket with four matches over three days being played this weekend.

On December 2, Phuket take on the Dehli Viceroys in two T20 matches, followed by a 40 over game on Saturday, December 3.

December 4 sees the return of the Island Cricket Club who will take on defending champions Patong in the Island Furniture League.

All matches are scheduled for a 9am start.